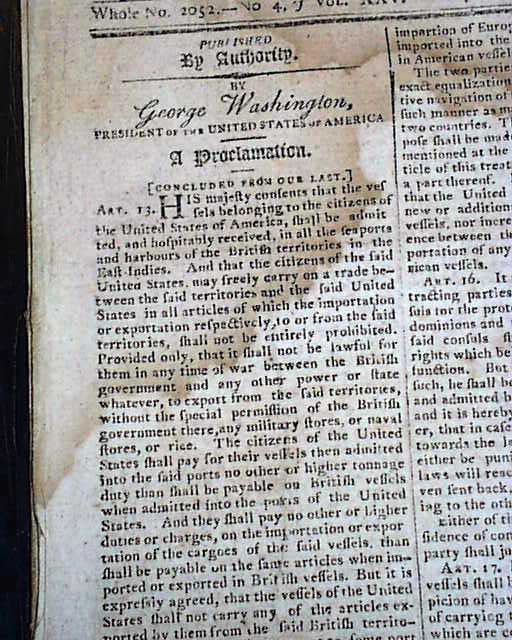 A very significant pair of issues as they contain, in its entirety, the full text of the Jay Treaty, one of the more significant 18th century documents in American history.
Taking much of the front page and part of page 2 in the issue of the 16th is part of Jay's Treaty through Article 12. Prefacing the Treaty is a "Proclamation" providing particulars about the conclusion and ratification of the Treaty. Includes word that the treaty was ratified upon the condition that much of the 12th article be suspended and be replaced with an additional article.
Text of the treaty concludes in the issue of the 19th taking all of the front page and a bit of pg. 2 where it is signed in type by Grenville and John Jay. Page 2 also has the "Additional Article" relative to the aforementioned condition. Signed in script type: Go. Washington.
Each issue is complete in 4 pages some damp staining, and irregular at the right margin.
Although the Treaty of Paris ended the American War for Independence, the years following saw relations between America and England deteriorate precipitously. England refused to evacuate the frontier forts in the Northwest Territory; in addition, she seized American ships, forcing American sailors to serve in England's war against France. The United States, for her part, passed navigation laws that were potentially damaging to Great Britain. It was apparent that a commercial war between the two countries would undermine the health of the American economy.
The American statesman John Jay, pressed into service as special envoy, went to England to negotiate disagreements between the two governments. On November 19, 1794 Jay's Treaty was signed, averting the threat of war. The Treaty eliminated British control of western posts within two years, established America's claim for damages from British ship seizures, and provided America a limited right to trade in the West Indies. Although Jay's Treaty provoked a storm of controversy (Jay was burned in effigy by mobs of outraged Americans), President Washington pressed for ratification. The treaty passed the Senate in June, 1795 (credit: "Archiving Early America")