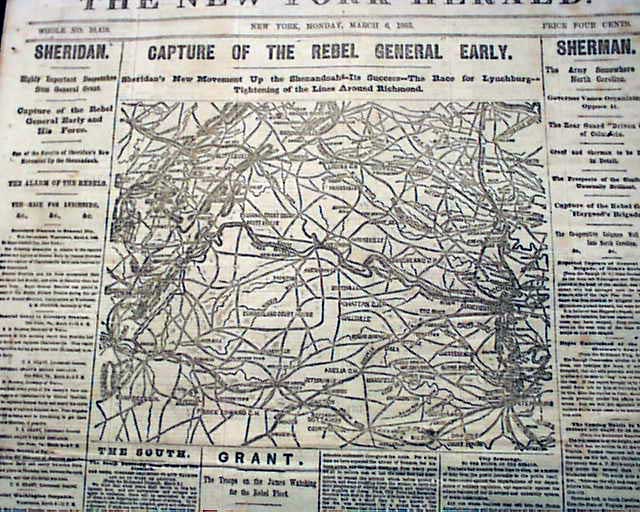 Page 4 headlines at the top of last column about the second inauguration of Abraham Lincoln include: "INAUGURATION" "Our Report of the Second Installation of Abraham Lincoln as President of the United States" "Scenes at the White House in the Streets and at the Capital" "Washington, March 4, 1861, and Washington, March 4, 1865." "THE CONTRAST" "The Grand Reception in the Evening" "All Classes and Colors Represented at the White House" "The President Shakes Hands With Everybody".
Much text, too much to photograph. Nice reporting about the inaugural scene. There is a small hole in this report affecting several words (see).
Plenty of war reporting on the front page including a large map headed: "CAPTURE OF THE REBEL GENERAL EARLY" with a wealth of ftpg. column heads including: "Sherman" "Sheridan" Grant" & so much more.
Eight pages, never bound nor trimmed, minor wear at margins.