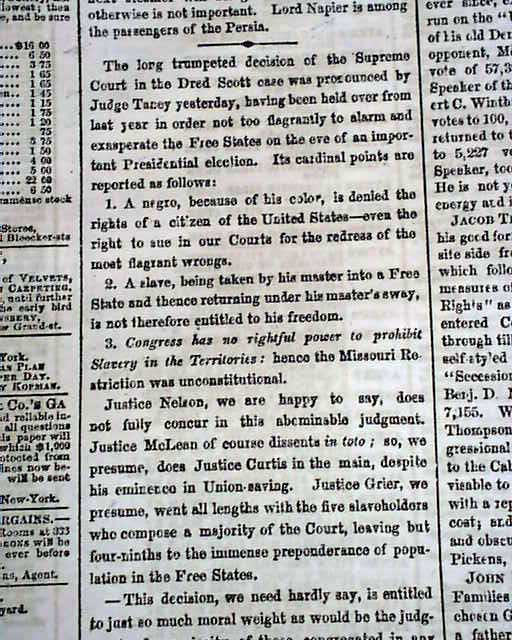 A very historic issue as page 5 has an article headed: "The Dred Scott Case Decided". This text takes about a half a column and includes the historic ruling by the Supreme Court, which begins: "The opinion of the Supreme Court in the Dred Scott case was delivered by Chief Justice Taney. It was a full & elaborate statement of the views of the Court. They have decided the following all important points:..." and what followed are the four key points.
The first notes: "Negroes, whether slaves or free, that is men of the African race, are not citizens of the United States, by the Constitution..." with the other particulars as well including comments from other Justices.
Additionally page 4 has an editorial with a similar report, beginning: "The long trumpeted decision of the Supreme Court in the Dred Scott case was pronounced by Judge Taney yesterday...Its cardinal points are reported as follows:..." and following this are the key points innumerated. It ends with: "...Let not Slavery exult over this  as a second & separate triumph from the inauguration & inaugural of Buchanan. They are parts of one whole, and as such will be regarded and met in the spirit of Freemen."
Eight pages, a few minor tears at margins, generally good condition.