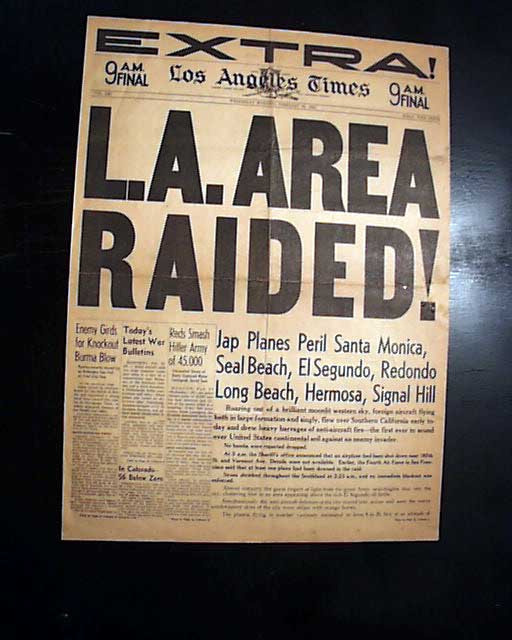 Simply a fantastic report on what is known as the "Battle of Los Angeles". The front page has one of the more dramatic, screaming headlines to be found: "L.A. AREA RAIDED ! " with a smaller head noting: "Jap Planes Peril Santa Monica, Seal Beach, El Segundo, Redondo, Long Beach, Hermosa, Signal Hill".
The report begins: "Roaring out of a brilliant moonlit western sky, foreign aircraft flying both in large formation and single, few over Southern California early today and drew heavy barrages of anti-aircraft fire--the first ever to sound over United States continental soil against an enemy invader...".
This event was a curious incident of World War II, the result of a rumored attack by the Japanese upon the coast of California. It was ultimately a false alarm attributed to a case of "war nerves" likely triggered by a lost weather balloon and exacerbated by stray flares and shell bursts from adjoining batteries.
This is the "9 a.m. Final" edition and present are four pages, paginated as (1), A and B with the back page not numbered. There were at least two different 9 a.m. editions, one other has more pages and slightly different front page reports, but the layout of this issue is such that I believe it to be complete in 4 pages.
There is a small repair to the right side which is almost unnoticeable, very mild rubbing at the folds, a few small repairs inside. Generally nice condition and a fantastic issue for display!