Home > Back to Search Results > Slavery at the Capital... Naval history is made with the Monitor vs. the Merrimac...
Click image to enlarge 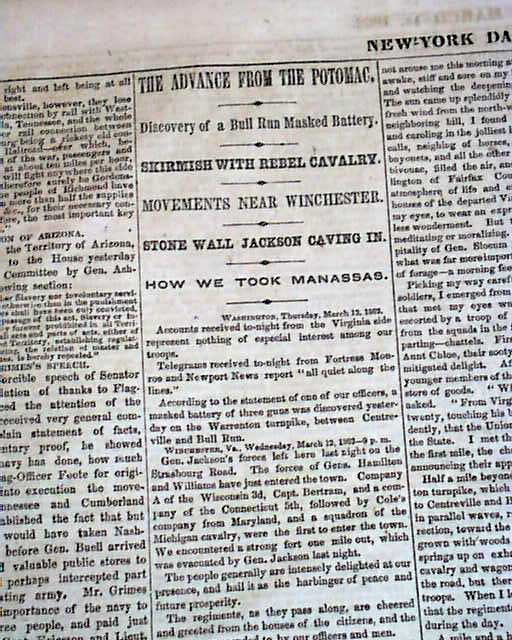 Naval history is made with the Monitor vs. the Merrimac...

A significant issue reporting one of the most famous naval battles of the 19th century: the Monitor vs. the Merrimac. It ushered in "modern" naval engineering with the use of iron-clad vessels.
One column heads on the back page include: "THE GREAT NAVAL FIGHT" "Official Report Of The Affair" "The Maiden Cruise Of The Monitor" "Rebel Accounts of their Losses and Damages" with the text taking 3 1/2 columns with considerable detail.
Included is an official report received by the Navy Department about the Rebel attacks at Newport News, mentioning in part: "...I arrived only in time to see the Cumberland sunk, by being run into by the Rebel ironclad steamer Merrimac...", signed in type: Wm. Radford, Commander. There is also a report from Lieut. Morris who was temporarily in command of the frigate Cumberland when she was attacked and sunk by the Merrimac.
Much other Civil War reporting throughout the issue but it pales in comparison to the Monitor-Merrimac content.
Although not photoed, there is an interesting article on page 4 under the heading: "Slavery At The Capital", a photo which can be viewed on our History's Newsstand Blog.
Eight pages, very nice condition.