Home > Back to Search Results > The 'Village Voice' reports on the Woodstock Music Festival...
Click image to enlarge 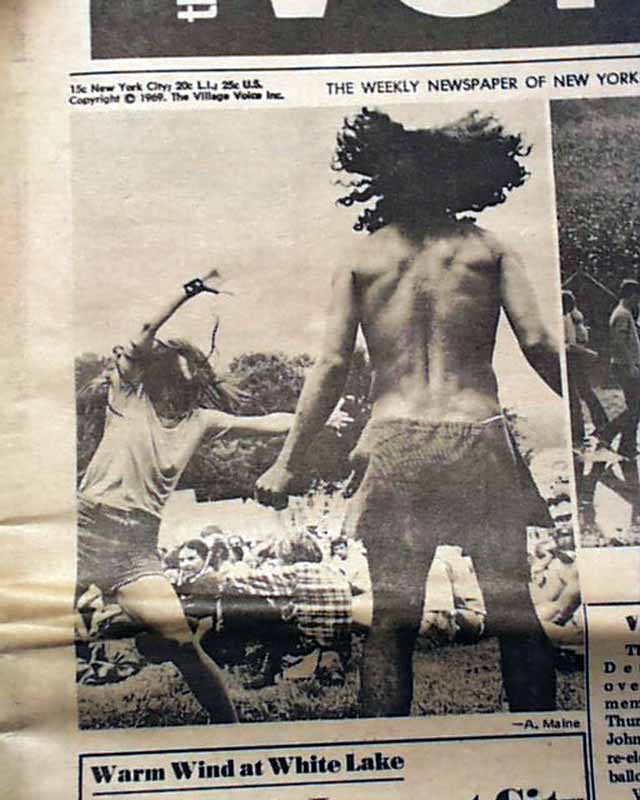 The 'Village Voice' reports on the Woodstock Music Festival...

A significant newspaper on the Woodstock Music Festival and particularly special to have this report in this counter-culture newspaper . The Woodstock Festival was perhaps the iconic event of the "hippie" era..
It is worth noting that "The Village Voice" was an American news and culture paper, known for being the country's first alternative newsweekly. It would seem logical that this newspaper would have a front page report Woodstock, the first issue published after the festival concluded.
Much of the front page is taken up with  four photos from Woodstock, with the text headed: "The 10th Largest City In the United States". The article beings: "The Aquarian Exposition at the Woodstock Music and Art Fair was fairly outrageous by anybody's standards. Stoned silly most of the time, more than half a million freaks from all over the country made the painful pilgrimage to Max Yasgur's 600 acre farm to play in the mud..." with much more on the details.
The article is considerably more extensive that what we've found in other newspapers, carrying over to take over half of page 10.
This is the complete 56 page issue, never bound nor trimmed, crease across the center, great condition.