Home > Back to Search Results > The Virginia Governor dissolves the House of Burgesses...
Click image to enlarge 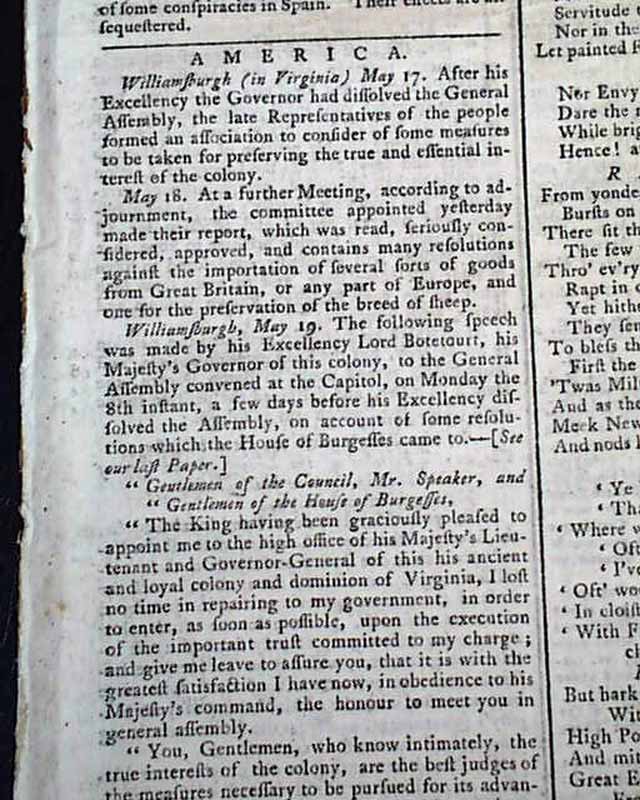 The Virginia Governor dissolves the House of Burgesses...

Item # 665006 THE GLOCESTER JOURNAL, England, July 10, 1769 (currently spelled Gloucester)  The front page under: "America" has very notable reports from Williamsburg, Virginia. It is prefaced with: "After his Excellency the Governor had dissolved the General Assembly, the late representatives of the people formed an association to consider off some measures to be taken for preserving the true & essential interest of the colony." What followed are notable reports relating to this, including an address from Governor Botetourt to the General Assembly given before he dissolved the Assembly. And then the very historic--and terse--document: "...When the governor dissolved the House of Burgesses on the 17th instant, he spoke to them as follows: "Mr. Speaker & Gentlemen of the House of Burgesses. I have hear of your Resolves, and augur ill of their effects. You have made it my duty to dissolve you; and you are dissolved accordingly."
Four pages, a very nice & decorative masthead featuring engravings on either side, full red tax stamp on the ftpg., very nice condition.