Home > Back to Search Results > Full page chart of troops from the Revolutionary War...
Click image to enlarge 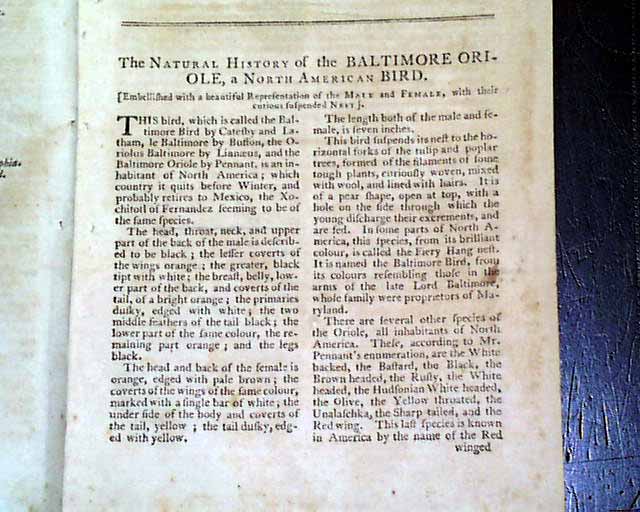 Full page chart of troops from the Revolutionary War...

Item # 664970 THE MASSACHUSETTS MAGAZINE, Boston, May, 1791  The issue begins with over a full page article: "The Natural History of the Baltimore Oriole, a North American Bird", lacking the plate of it.
Other articles include: "On the Impiety of Profane Swearing" "Influence of the American Revolution Upon the Human Body", and there is also a nice full page: "Accurate Statement of the Troops (Continental & Militia) Furnished by the Respective States during the Late War from 1775 to 1783, Inclusive".
Other articles: "Account of the Early Statues of Harvard College" "An Account of William Penn" & more.
Near the back are 5 pages of: "Abstracts of the Proceedings of Congress" from this formative year, as well as the "Domestick Chronicle" which has the latest news from various American cities including a letter signed in type by: Thomas Paine.
Complete in 64 pages, 5 by 8 1/4 inches, full title/contents page, minor foxing, good condition.