Home > Back to Search Results > The Texas Declaration of Independence...
Click image to enlarge 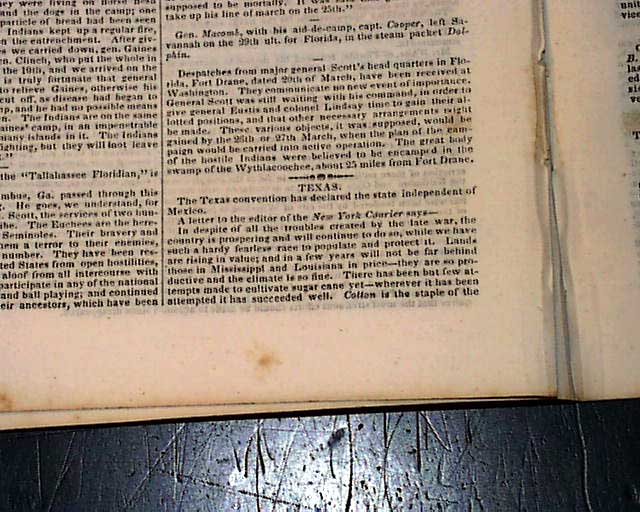 The Texas Declaration of Independence...

This issue has much content concerning Texas, one item with a brief statement reading: "The Texas convention has declared the state independent of Mexico." Also included is a letter from Texas noting: "...the country is prospering & will continue to do so...we have such a hardy fearless race to populate & protect it. Lands are rising in value..." with more.
This is followed by a letter from Washington, Texas which reflects upon the dire hopes of the Alamo, & includes: "...Travis' last express states San Antonio was strongly besieged; it is much feared that Travis & company are all massacred as despatches have been due from that place three days...last accounts, the Mexican were to a considerable number between Gonzales and San Antonio...Texas has been declared free & independent but unless we have a general turn out & every man lay his helping hand too, we are lost...Travis closes his last express with these words--Help! O my country."
Yet another letter includes: "...from Nacogdoches, in Texas, informs us that whilst there he dined in public with col. Crockett who had just arrived from Tennessee..." and includes the now famous quote from Crockett on how he came to be in Texas (see photos). There is also: "Army Orders" which begins: "War is raging on the frontiers. Bejar is besieged by 2000 of the enemy...our force in Bejar was only 150 strong. The citizens of Texas must rally to the aid of our army or it will perish...Independence is declared--It must be maintained..." signed in type: Sam. Houston, commander-in-chief of the army.
As if all this was not sufficient, the same page also has the historic text of the Texas: "Declaration of Independence" which has a prefacing sentence: "The unanimous declaration of independence, made by the delegates of the people of Texas....at the town of Washington, on the 2d day of March, 1836." and what follows is the full text taking most of the page and with the signatures in type of the delegates.
Complete in 24 pages, 6 by 9 1/2 inches, very nice, clean condition.