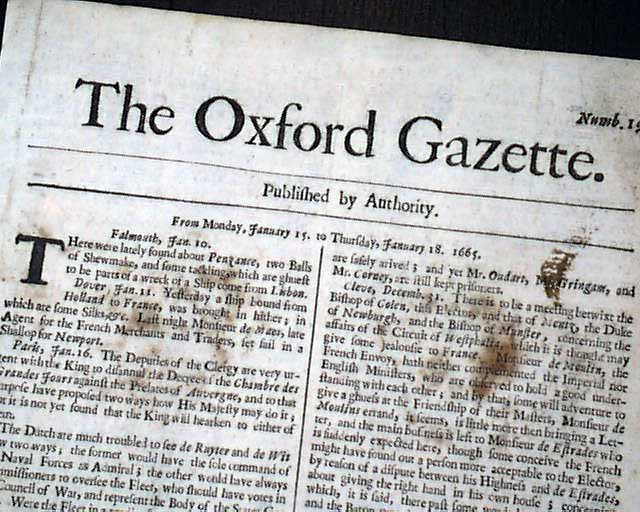 This is an extremely famous--and rare--title, being the predecessor of the famous "London Gazette", the oldest continually published English language newspaper in the world. Because of the Plague at this time, the Royal Court had removed itself from London to Oxford when this newspaper began, so issues #1 thru #23 were published in Oxford (actually published simultaneously in London & Oxford), and when the contagion had subsided & the Court returned to London this newspaper went with it and renamed itself "The London Gazette" with issue #24, and the rest is history. The London Gazette still publishes to this day. This is issue number 19.
The front page has much reporting on news events in Europe, including military, such such content carrying over to page 2 as well.
The bottom of the back page has the weekly account of deaths from the Plague, reading: "The Account of the weekly Bill runs thus, Total 375. Plague 158. Increased 110." Also near the bottom of the page is a report noting: "Our letters from Paris of the 10th brings us the news of the death of the Queen Mother of France, Anne of Austria, sister to the late Philip the Fourth of Spain, who after great & languishing pains from a cancer of her breast, dyed there that morning to the infinite regret of that whole kingdom..." with a bit more.
A single sheet newspaper measuring 7 by 11 1/4 inches, dirtiness to the bottom half of the front page, plus scattered foxing and a few tiny worm holes. There is no loss of readability. Ample margins throughout.
An exceedingly scarce newspaper and a cornerstone issue for any early newspaper collection, being among the first few issues of the world's oldest continually published newspaper--and from the very brief period when it published in Oxford.