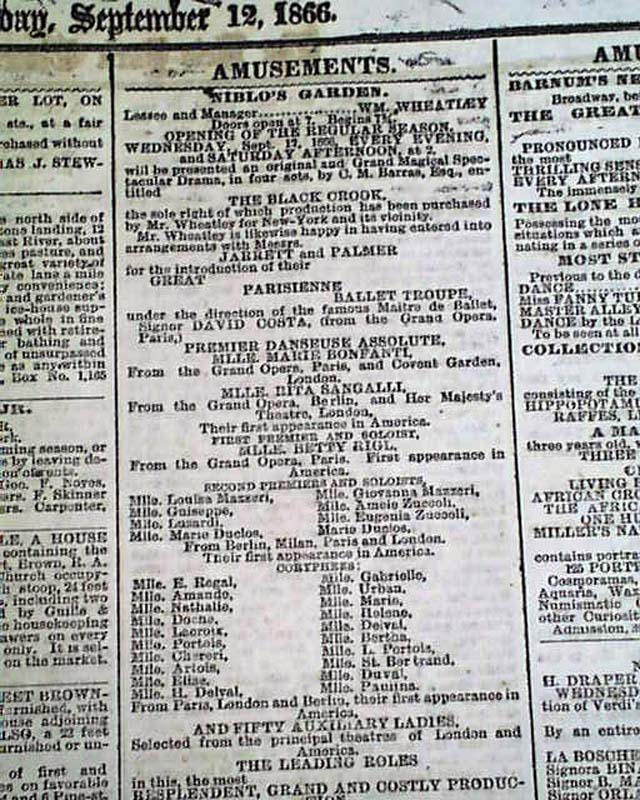 A terrific and very historic trio of newspapers relating to the first theatrical musical, "The Black Crook".
As Wikipedia notes: "Its significance is being considered the first piece of musical theater that conforms to the modern notion of a "book musical". The book is by Charles M. Barras, an American playwright. The music is mostly adaptations, but some new songs were composed for the piece. It opened on September 12, 1866 at Niblo's Garden on Broadway, New York City and ran for a record-breaking 474 performances. This production gave America claim to having originated the musical. The Black Crook is considered a prototype of the modern musical in that its popular songs and dances are interspersed throughout a unifying play and performed by the actors."
It's development is curious and partially accidental, for in May of 1866 a fire at the Academy of Music left a French ballet troupe without a place to perform. The company, its scenery, and its elaborate stage effects were hastily added to a production of "The Black Crook" at Niblo's Garden. The resulting bizarre combination of Faustian drama and tutu-and-tights dance routines became a major hit and is widely considered to be the first full-fledged Broadway musical.
Offered as a single lot are three issues:

September 11 contains on page 7 an advertisement of Niblo's Garden noting that although originally scheduled to open on September 11, it would now open on the 12th due to "the vast amount of labor required in the production."

September 12 contains at the top of page 7 an advertisement announcing: "The opening of the Regular Season, Wednesday September 12..." which then continues with detailed specifics of  "The Black Crook". Under the heading "Amusements" is a report from Niblo's Garden that: "Mr. Wheatley announces the positive production this evening of the new play of "The Black Crook", in which will appear the beautiful ballet troupe, and incidental to which are scenes of wonderful transformation and grand spectacular demonstration."

September 13 contains on page 4 a review of the first performance of "The Black Crook" from the previous evening (along with another ad on page 7), which is quite lengthy & complimentary. Near the end it notes: "...No similar exhibition has been made in an American stage that we remember, certainly none where such a combination of youth, grace, beauty and elan was found. The curtain was rung up three times at the close of this act, in compliance with the peremptory demands of the house...It will be repeated every night, and is well worth seeing, as it is decidedly the event of this spectacular age." See the photos for the complete review. This issue also includes an advertisement for the play.

A terrific trio of issues of this historical theatrical production, with an advertisement for the first performance as well as a review of it the following day. And all three issues are from the city of its production.
Each issue is complete in eight pages and is in nice condition.