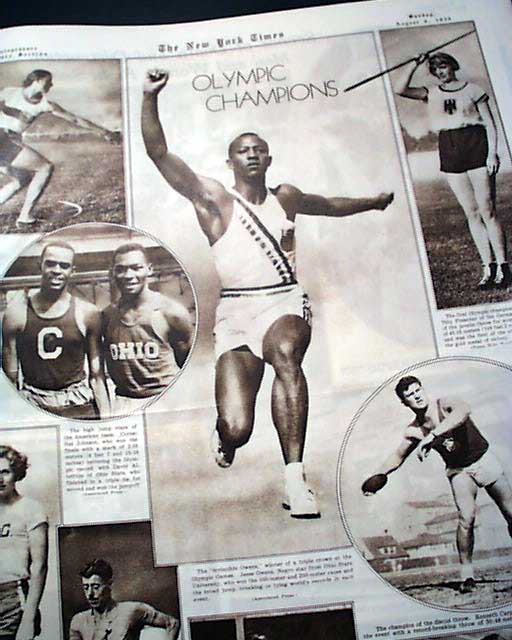 Jesse Owens at the Berlin Olympics...


THE NEW YORK TIMES (with Rotogravure Section), August 9, 1936  The top of the front page has: "Major Sports Yesterday" with "Olympic Games" as the first topic, which notes: "...Jesse Owens ran on the 400 meter team that tied the world record ..." (see). Inside the sports section has a banner head: "U.S. Sweeps First Three Places in Olympic Decathlon as Morris Sets Record", plus a lengthy article which includes reporting on the 4 by 100 dash results which tied a world record. See the photos for the text which notes the controversial decision to remove the Jewish athletes at the last minute. There is also a somewhat large photo of the start of the 100 meter final, showing Jesse Owens (see).
Page 2 of the sports section has: "Owens 'Shaky' as Mobs Clamor for Autographs" (see).
The Rotogravure Section features a page "Olympic Champions" which includes a 1/4 page photo of Jesse Owens.
A sidebar to the Olympic games was Adolph Hitler's refusal to acknowledge the achievements of the African-American athletes, not surprising given his belief that only his superior German Aryan race would dominate at the games. This is corroborated by a sport page report in another issue which includes: "...So delighted was Chancellor Hitler  by the gallant fight that Long had made that he congratulated him privately just before he himself left the stadium. In fact, his eagerness to receive the youthful German was so great that the Fuehrer condescended to wait until his emissaries had pried Long loose from Owens, with whom he was affectionately walking along the track arm and arm. All the Negro received was his second gold medal, which probably satisfied him well enough at that...".
This is the complete Sunday issue with 60+ pages, disbound, in very nice condition. Rag edition.