Home > Back to Search Results > Beginning of the Impressionist movement in France...
Click image to enlarge 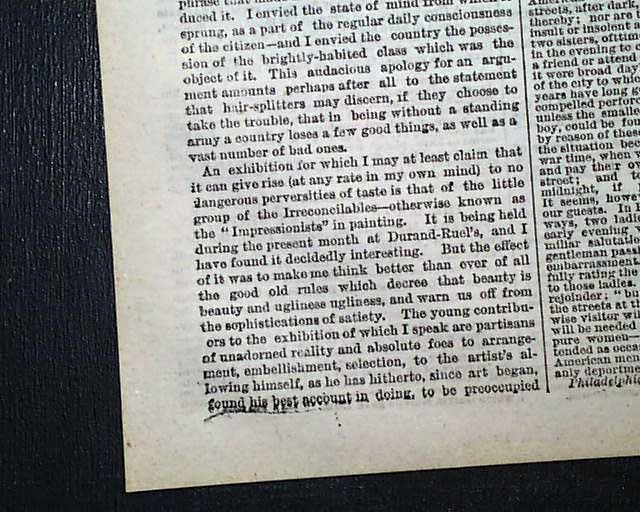 Beginning of the Impressionist movement in France...

This is an exceedingly significant newspaper on the founding of the Impressionist movement in art.
Page 2 has an inconspicuous yet quite historic report which essentially reports on the beginning of the Impressionist movement in the art world in France.  Those artists now known as the "Impressionists" were ostracized by the established art world who would not allow their work to be shown at the prestigious Salon exhibition in Paris. They decided to hold their own exhibition, the first meeting with no success, but the second, in 1876, was somewhat complimentarily reviewed by some. That exhibition is reported on pg. 2 in this issue under the heading 'Parisian Festivity", portions of which include:
"An exhibition for which I may at least claim that it can give rise (at any rate in my own mind) to no dangerous perversities of taste is that of the little group of the Irreconcilables--otherwise known as the "Impressionists" in painting. It is being held during the present month at Durand-Ruel's & I have found it decidedly interesting...The young contributors to the exhibition of which I speak are partisans of unadorned reality & absolute foes to arrangement, embellishment, selection, to the artist's allowing himself, as he has hitherto, since art began, found his best account in doing, to be preoccupied with the idea of the beautiful...the painter's proper field is simply the actual, and to give a vivid impression of how a thing happens to look at a particular moment, is the essence of his mission..." with more.
A terrific opportunity for a positive review (rarely found then) of this movement in the art world which would not gain general acceptance until decades later.
It is curious that this lengthy article is signed by: Henry James, Jr. Henry James, the famed writer, was in Paris in the 1870's and Wikipedia notes he was a contributor to the New York Tribune at that time.
Twelve pages, some wear to the top of the blank spine not affecting any text, generally nice.