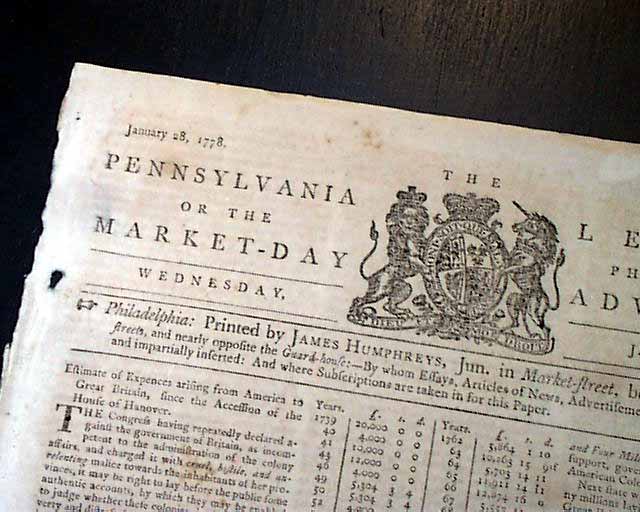 
THE PENNSYLVANIA LEDGER OR THE WEEKLY ADVERTISER, Philadelphia, Jan. 28, 1778

This was a Tory newspaper published in Philadelphia when the British occupied the city. It began in 1775 and ended when the British evacuated the city in May of 1778. Not surprisingly, the masthead features an engraving of the Royal coat-of-arms.
Only to be found in a Loyalist newspaper, the entire front page is taken up with text and many charts headed: "Estimate of Expences Arising from America to Great Britain since the Accession of the House of Hanover". The text begins: "The Congress having repeatedly declared against the government of Britain as incompetent...and charged it with cruel, hostile, and unrelenting malice towards the inhabitant..." and then goes on to prove with the various financial charts just how supportive & helpful England has been to the colonies through the years. Page 3 has a: "Proclamation" by General Howe concerning the inflating of food prices in Philadelphia. This is followed by an advertisement for the printing of "Common Sense".
Four pages, numeric notations in margins next to ads (this was the editor's copy), nice condition.