Home > Back to Search Results > A foreigner's opinion on America's quest for independence...
Click image to enlarge 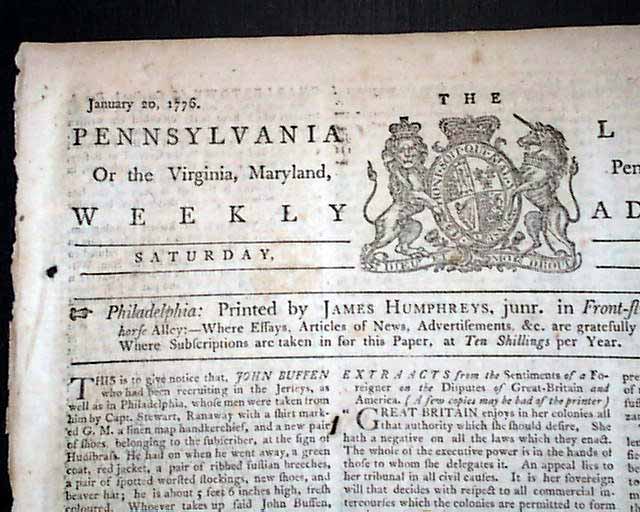 A foreigner's opinion on America's quest for independence...

Nearly two-thirds of the front page are taken up with a terrific consideration of the troubles between England & the colonies titled: "Extracts from the Sentiments of a Foreigner on the Disputes of Great Britain & America".
A few bits include: "...Can they so far betray those rights which are so dear to them as to aim at reducing their brethren & their children to slavery?...let them revolve in their thoughts all the benefits which they derive from their original country...Let their love of the parent country however be attended with a certain jealousy respecting their own Liberty...they know also that reduced to the dire  alternatives of slavery or civil war, if they must take up arms in defence of civil liberty it is their duty to avoid sullying so fair a cause by the horrors & barbarities which are the attendants of sedition, and that with the determined purpose of never sheathing the sword till they have recovered their rights...They could not embrace a system of absolute INDEPENDENCE without bursting the bands of religion, of oaths, of laws, of language, of blood, of interest, of commerce..." and so much more.
Pg. 2 has a lengthy report from Charleston which includes much on the military events in that theatre of the Revolutionary War. The balance of the inside pages have reports from Williamsburg, Cambridge, New York, and Philadelphia with the Williamsburg report including an extract of a letter which begins: "The cannonade of the town began about a quarter after three yesterday from upwards of 100 pieces of cannon...under cover of their guns they landed & set fire to the town in several places near the water..." with more. The Phila. report begins: "By an express from Canada we learn that in storming the city of Quebec Gen. Montgomery was unfortunately killed, upon which the Provincial troops were immediately drawn off...".
Pg. 3 also has a small ad for "A New Edition of COMMON SENSE Is just published & now selling by Robert Bell, in Third St., Phila." and the back page also has a more detailed ad for the publishing of "Common Sense". The bkpg. also has an article headed: "Liberty Of The Press".
Four pages, a few numeric notations in margins next to ads (this was the editor's copy), very nice condition.