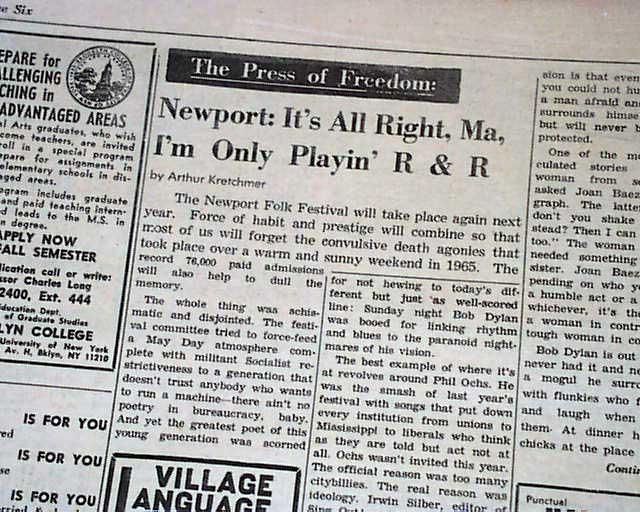 The front page has a banner heading: "Newport: It's All Right, Ma", a reference to Dylan's transition from folk to rock at the Newport Folk Festival. The writer editorializes on the transition, and noting that all will still be well with the music world. His first sentence is: "The Newport Folk Festival will take place again next year."
But there is criticism: "Bobby Dylan is out of control. He never had it & never will. Like a mogul he surrounds himself with flunkies who feed him lines & laugh when he repeats them...And, wearing a white Mad Hatter's hat whose crown is about 20 inches high, he shuns attention. And he plays rock'n' roll before 10,000 folk purists...The irony of the folklorists & their parochial ire at Dylan's musical transgressions is that he is not Guthrie or the ShangriLas, but this generation's most awesome talent. And in 60 years you will read scholarly papers about his themes..." and more. There is also mention of him being booed when he performed 'Like a Rollin's Stone'...".
It was at Newport where he performed his first electric concert. Some sections of the audience booed the performance, leading members of the folk movement to criticize him for moving away from political songwriting and for performing with an electric band.
This was a pivotal concert, at a time when Dylan was exploring more rock styles, much to the dismay of his folk music fans and those who wanted only more of his acoustic guitar sound.
Complete in 24 pages, tabloid-size, very nice condition.

Additionally, included is the July 15, 1965 issue of Village Voice which has an advertisement for the upcoming "Newport Folk Festival" listing Bob Dylan scheduled for Sunday. All the other performers are listed as well for the 4 day event (see). Above this ad is one for "Judy Garland" performing at the Forest Hills Festival the week prior.
Complete in 20 pages, tabloid-size, very nice condition.

As most might be aware "The Village Voice" was an American news and culture paper, known for being the country's first alternative newsweekly. It introduced free-form, high-spirited, and passionate journalism into the public discourse a tradition it maintained throughout its 60+ year history. This is the perfect newspaper for this Dylan article.
Provenance note: This issue comes from The Village Voice's own archives, part of their in-house collection used to create their digital archive.
Alert: Many issues of The Village Voice contain articles and/or photos which some consider offensive, and are certainly inappropriate for children. Please purchase with discretion.