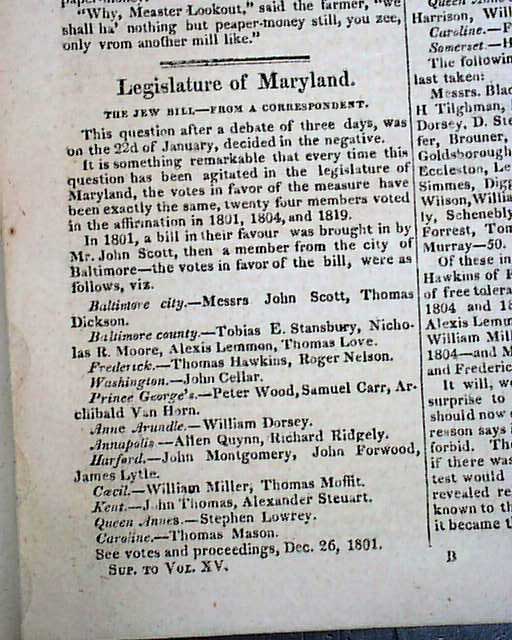 Certainly the best content in this issue is in the lengthy "Supplement" to the volume, with an article headed: "Legislature Of Maryland - The Jew Bill--From A Correspondent" which takes nearly four pages.
As a bit of history, In 1776 Maryland's constitution safely protected "...all persons professing the Christian religion..." yet said nothing at all for those of other beliefs. It was a fact not widely known among other Americans that in the State of Maryland, and in Maryland alone, a citizen professing the Jewish religion could not hold any office, civil or military. In 1797 Solomon Etting, Baltimore leader and representative Jewish figure, along with other prominent Jews petitioned the Maryland Assembly to address this prejudicial issue and secure equal rights for Jews. The petition was well received but ultimately rejected. Year after year as it was presented and turned down new advocates were enlisted including influential Gentiles. In 1818 Judge H. M. Brackenridge and others began a vigorous battle to right this wrong. The legislation ultimately to be known as "The Jew Bill" was enfranchised in 1825 and confirmed the following year.
The beginning of the article includes: "This question after a debate of three days was on the 22nd of January decided in the negative. It is something remarkable that every time this question has been agitated in the legislature of Maryland, the votes in favors of the measure have been exactly the same, 24 members voted in the affirmation in 1801, 1804, and 1819..." with much more, with some historical background.
Of special significance is the weighing in of Thomas Jefferson, James Madison, and John Adams with their support of the Jew Bill. The Jefferson letter--from May 28, 1818--begins: "Your sect, by its sufferings, has furnished a remarkable proof of the universal spirit of religious intolerance inherent in every sect...Our laws have applied the only antidote to this vice,  protecting our religious as they do our civil rights, but putting all on an equal footing..." with more. The Madison letter begins: "Having every regarded the freedom of religious opinions, & worshipers, equally, belonging to every sect, & the secure enjoyment of it as the bet human provision for bringing all into the same way of thinking..." and the Adams letter includes: "...I wish your nation may be admitted to all the privileges of citizens in every country of the world. This country has done much, I wish it may do more, and annul every narrow idea in religion, government and commerce..." with more.
At the end of this discussion is: "AN ACT--To extend to the sect of people professing the Jewish religion, the same rights & privileges that are enjoyed by Christians..." with the full text of the act.
The weekly issue is complete in 16 pages, and the Supplement is complete in 192 pages. Measures 6 by 9 1/2 inches, very nice condition.