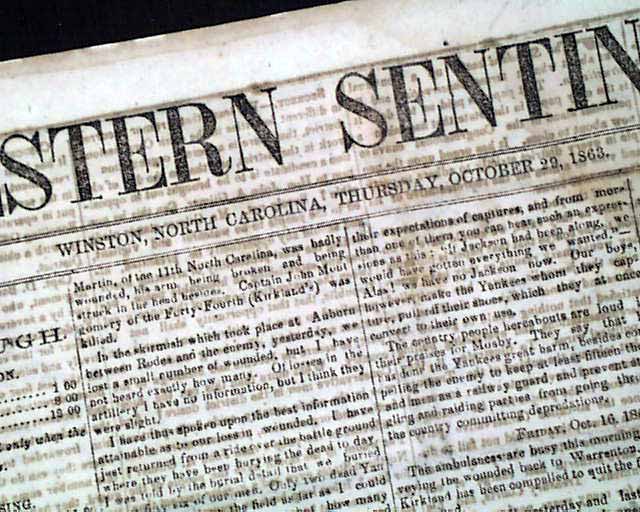 This is a very rare title from the Confederacy. According to Brigham only four institutions in the United States have any holdings of this title from the Civil War, most just a few scattered issues. The American Antiquarian Society has no issues recorded from this era.
The ftpg. contains a first column report with heads: "From General Lee's Army" "The Late Movements!" "Various Skirmishes!!" "North Carolina Killed & Wounded" with this coverage taking full half of the front page.
Also on the ftpg. are: "North Carolina Christian Conference" "Commissioning a Dead Man" which is an interesting piece.
Also on the ftpg: "Gen. Wheeler in Tennessee" and "The Prospect".
The Civil War coverage continues on the inside pages with: "The News" which has various tidbits, and "To Our Patrons" and "The Recent Raid" and "Gen. Hood and his Men at Chickamauga" and "Northern Items" amongst other articles.
Much of the back page is taken up with ads, including one for: "Wanted for the Soldiers" and "Confederate War Tax".
Four pages, a very light water stain in the upper right of each leaf, and a minor archival mend to pg. 2, otherwise in very nice condition.