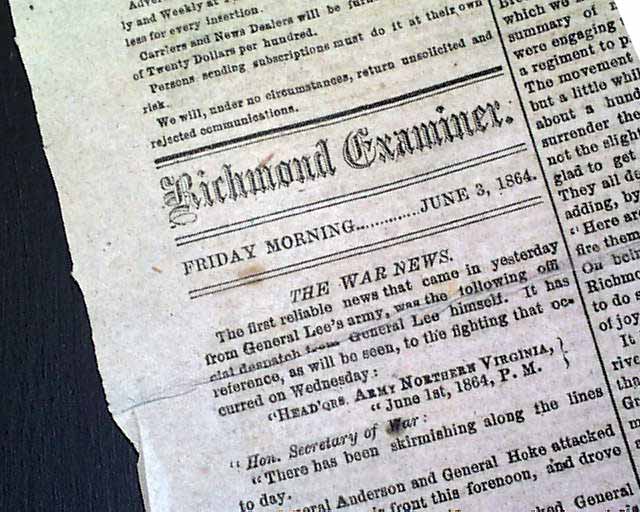 The front page has: "The War News" which includes a letter signed in type: R. E. Lee, General, which has an introductory paragraph as well.
Other front page items include a letter signed in type: J. E. Johnston, and items headed: "Officers Retired From the Army" "General Lee's Army" from near Cold Harbor, taking over half a column; "From General Lee's Army--The Latest--Glorious News!" which includes: "This morning the enemy were found to have abandoned the front of A. P. Hill's corps, stretching from Atlee's nearly around to the Mechanicsville pike...". Also subheads: "The Negro Troops on the Southside" "The Vandalism of the Enemy on His March from Spotsylvania--Stragglers From Grant's Army" "The Latest" and more.
War news continues on the bkpg. and also includes the always-interesting editorial. There is also a nice report concerning events around Spotsylvania including: "...The unanimous determination of Lincoln, his Cabinet & the commanding Generals is to concentrate the whole available power of the United States for the capture of Richmond...".
Also on the bkpg. is: "Additional From The North" with subheads: "The Death of Old Giddings" "Old Abe's Honesty" "The Granting of Furloughs" "Ganks' Career As A General" "The Cavalry" and more. There is also reporting from: "The Confederate Congress". There is also an item: "Lincoln 'Said All He Had to Say' ".
Complete as a single sheet issue with a one column masthead, typical from the latter months of the war as paper was scarce. Close-trimmed at the bottom causes loss to only the one line of the editorial, otherwise very nice, clean condition.