Home > Back to Search Results > Nice reports on the Battle of Harper's Ferry...
Click image to enlarge 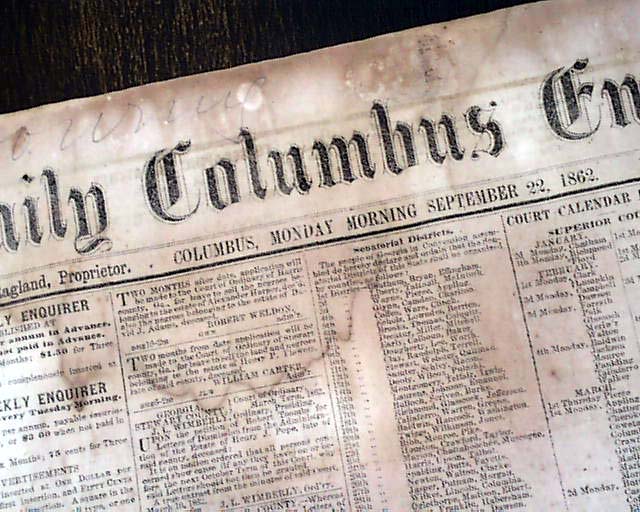 Nice reports on the Battle of Harper's Ferry...


DAILY COLUMBUS ENQUIRER, Georgia, Sept. 22, 1862  Certainly one of the less common Confederate titles from the Civil War. Columbus is in Southwest Georgia on the Alabama border very near Montgomery.
Various reports inside include: "The Locality of the Late Battle" "From J.T.S. at Montgomery" "Progress & Events of the War" "11,500 Prisoners Taken at Harper's Ferry!" "Further From the Maryland Fight: 3,000 Prisoners!" "Federal Evacuation of Cumberland Gap!" "The Fighting at Harper's Ferry" "Twenty-six Pitched Battles" "Chattanooga, Tenn." "Arms & War Material in the South" "From General Forrest's Command" and more.
Most of the back page is taken up with the: "Constitution of the State of Georgia, Ratified July 2, 1861".
Four pages, various foxing & light damp staining, bit irregular at the spine, nice condition.