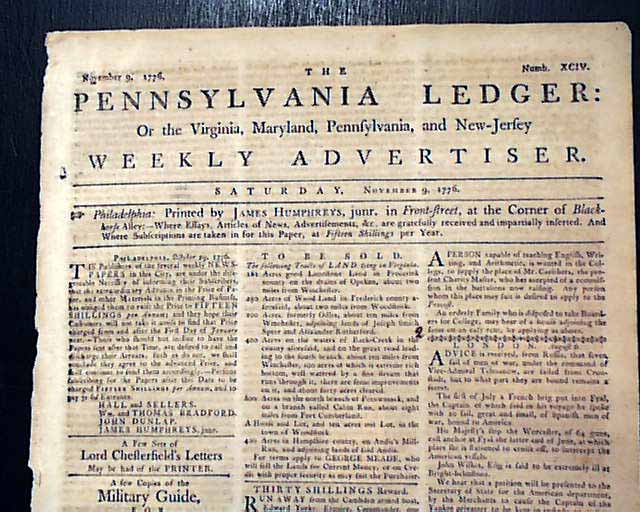 This was a decidedly Tory newspaper, supportive of the British efforts in America. This newspaper ended publication in June, 1778 when the British evacuated the city.
The front page has a report noting in part: "During the time that General Howe lay at Turtle bay he dispatched several sloops to New York, Staten Island, etc. to reconnoitre the situation of the American forces in those parts...informed him that General Putnam lay at New York entrenched with a body of 12,000 men..." with more. Page 2 has a note: "It is said the American provinces have not only declared themselves independent but that they have sent memorials thereof...". Also a nice letter form Gen. Schuyler dated from Saratoga, Oct. 16, 1776, begins: "Our fleet which suffered severely in an engagement on the 12th with the enemy, has been still more severely handled in a subsequent, insomuch that the enemy are left masters of the Lake & are marching on to attack our army at Ticonderoga..." with more, signed in type: Phi. Schuyler. Another item has: "We hear that on the evacuation of our fortresses on Long Island, the continental currency sunk in its value one thousand per cent...".
A report from New York has an account of the terrible fire which swept through New York City, beginning: "On Saturday the 21st instant we had a terrible fire in this city which consumed about one thousand houses, or nearly a fourth of the whole city..." with further details carrying over to take one-third of page 3 as well.
Four pages, numeric notations in margins next to ads (this was the editor's copy), generally very nice condition.