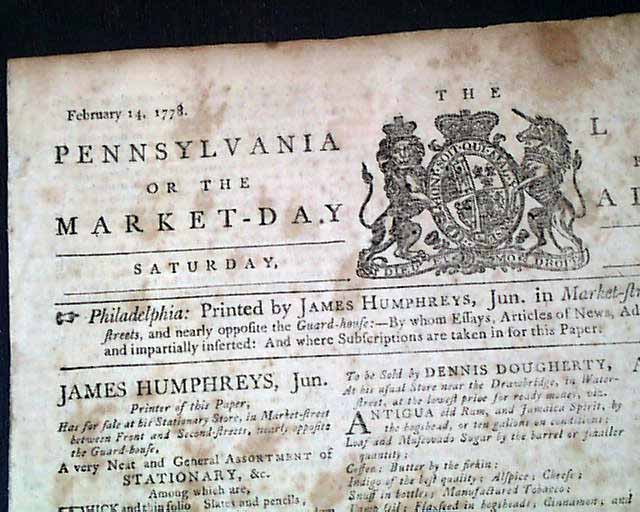 
THE PENNSYLVANIA LEDGER OR THE PHILADELPHIA MARKET-DAY ADVERTISER, February 14, 1778

This was a strongly Tory (supportive of the British cause) newspaper which began in 1775 and closed shop in May of 1778 when the British evacuated Philadelphia.
The entire front page is taken up with ads, one of which is for the printing of: "Common Sense".
Page 2 has numerous reports which relate to the Revolutionary War, bits including: "...the enemy's ships went up Rappahannock River & took a French ship with 4 or 500 hogsheads of tobacco..." and a report from Congress, now located in at Lancaster, Penna: "...that the invasion of the state of Pennsylvania by the enemy has obstructed this business..." that business being the lottery. Also an item: "At a General Court Marshal held at Whitemarsh, Penna...by order of His Excellency General Washington...Captain Vail, of the 2nd North Carolina battalion, charged with cowardice at the battle of Germantown, was tried & found guilty of that crime...it should be deemed scandalous for any officer to associate with him..."
Page 2 also has a report concerning problems with Indians.
Also: "By order of His Excellency Sir William Howe, K.B., General and Commander in Chief...PROCLAMATION" concerning the support of the poor. Also another Order" by Sir William Howe concerning the illegal possession of oil.
Page 2 also has an interesting note which begins: "The Printer, on account of the death of the Negro man who delivered this paper to the subscribers lying above Market Street, is not able to send it to their houses...".
Page 3 has a lengthy letter which is prefaced with: "...consistent with the modern plan of American liberty, a young gentleman of that place [Charleston] was apprehended on suspicion of being the author, and thrown into jail, where we believe he remains to this day." and what follows is the letter. Note one of the footnotes which reads: "The uniform of the South Carolina rebels is a hunting-shirt, such as the farmers servants in England." The balance of pg. 3 is taken up with ads. All of pg. 4 is taken up with ads.
Complete in 4 pages, various foxing and staining, most of which does not deter readability. Not surprisingly, being a Tory newspaper the masthead features an engraving of the Royal coat-of-arms.

The British evacuate Savannah, and so...