Home > Back to Search Results > Much on the America vs. England disputes...
Click image to enlarge 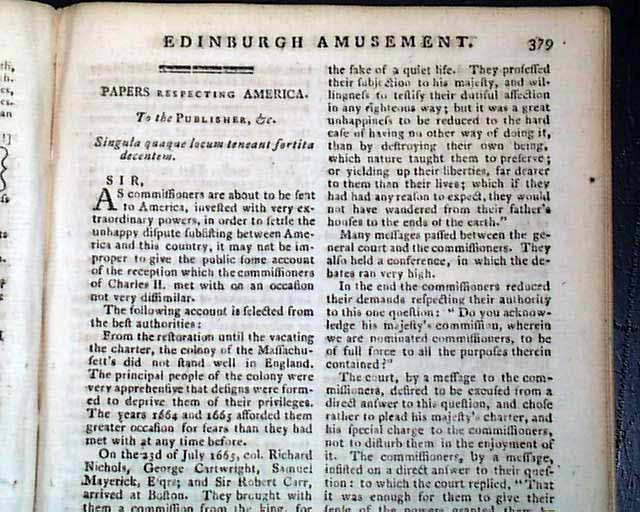 
THE WEEKLY MAGAZINE OR EDINBURGH AMUSEMENT, Scotland, Dec. 14, 1775  Inside has: "Papers Respecting America" which begins: "Ask commissioners are about to be sent to America, invested with very extraordinary powers in order to settle the unhappy dispute subsisting between America and this country..." and then with some historical references.
Also: "Lord North's New American Bill" which has near the beginning: "The preamble  sets forth, that whereas many persons in the colonies...have set themselves in open rebellion & defiance to the just & legal authority of the parliament of Great Britain..." which takes over 2 pages & is continued in a future issue.
Then a section of reports headed: "America" with a dateline of Charleston, and then a report that: "...The provincial congress of North Carolina broke up on Sunday...they have raised 1000 men...have appointed a provincial council of safety..." and more. Then also a letter from New Bern, North Carolina, and an: "Extract of a Letter from Dr. Franklin to a friend in London", as well as a report from the "Provincial Congress in Virginia" which notes: "...to treat all such natives of Great Britain resident here as do not shew themselves enemies to the common cause of America, with lenity & friendship...".
Complete in 32 pages although the page numbering is in error, 5 by 8 inches, disbound, great condition.