Home > Back to Search Results > Latest reports on the Revolutionary War...
Click image to enlarge 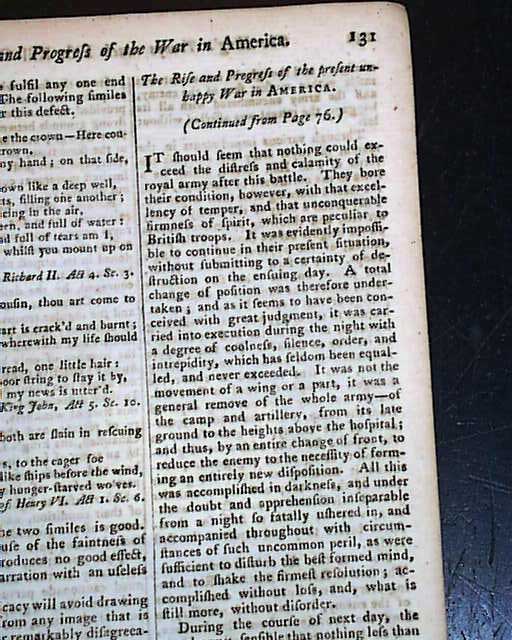 Latest reports on the Revolutionary War...


TOWN & COUNTRY MAGAZINE, London, March, 1780  Included is the continuing report titled: "Rise & Progress of the War in America" which recounts, in some detail, the recent events of  the Revolutionary War. Subheads include: "The King's Troops Reach Fish Kill Creek" "Clinton's Expedition Up the North River" and "Effect of the Transactions in England".
Under "Domestick Intelligence" are reports concerning the Revolutionary War, including: "...The different rumours concerning the arrival of American agents to propose terms of reconciliation from the Congress, seem equally void of foundation...is the greatest reason to believe that the ensuing campaign will be carried on by us with the greatest vigour...". Other war-related reports from the Caribbean. And mention that two French frigates were chased within the capes of Virginia & ran ashore, and the local residents: "...got possession of them & have put them into the hands of the loyal subjects which will probably give a turn to the affairs of this colony."
Complete in 56 pages, 5 by 8 1/4 inches, masking tape at the spine, full title/contents page, very nice condition. No plates are included.