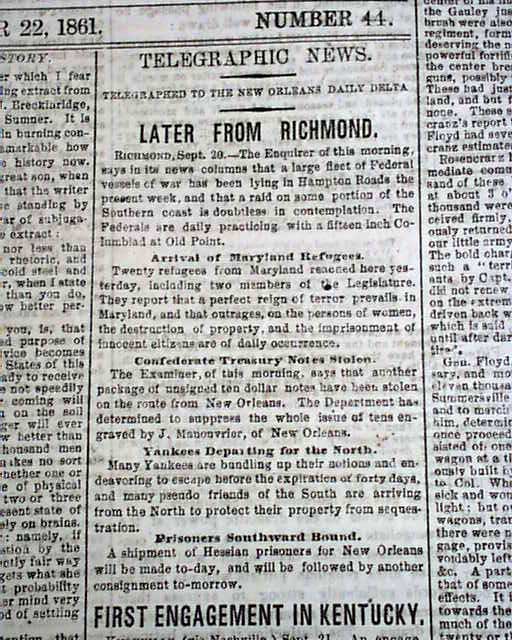 Among the front page items are: "First Engagement In Kentucky" which includes: "An engagement took place on the 19th in Easter Kentucky between 800 Confederates and 1800 Federals, in which the Federals were completely routed." with a bit more.
Also: "Norther Reports from Western Virginia" "Later From Richmond" "Gen. Buckner's Address to the People of Kentucky" & "Gen. Floyd's Engagement with Rosencranz".
More war items on pages 2 & 3 along with many ads, and the bkpg. is filled with ads included one headed: "Sale of Negroes" with details.
Truly Confederate newspapers from New Orleans are very difficult to find, as Admiral Farragut entered the mouth of the Mississippi in mid-April, 1862 and finally took New Orleans on April 28. Shortly thereafter Benjamin Butler moved in and took control of the city, it surrendering without a fight. So "Confederate" issues from New Orleans are limited to those published between Louisiana's secession from the Union on January 26, 1861 and the end of April, 1862, just a brief 15 month period.
Four pages, nice condition.