Home > Back to Search Results > Cornwallis surrenders at Yorktown... Full text of the Articles of Capitulation...
Click image to enlarge 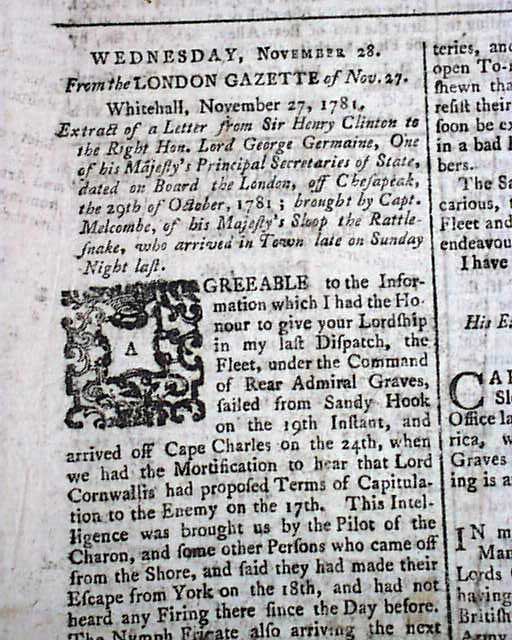 Cornwallis surrenders at Yorktown... Full text of the Articles of Capitulation...

This is a terrifically historic issue, reporting the surrender of Lord Cornwallis and his British army to Washington at Yorktown, Virginia, essentially ending the Revolutionary War.
The front page has a report which includes: "...when we had the mortification to hear that Lord Cornwallis had proposed terms of capitulation to the enemy on the 17th. This intelligence was brought us...other persons who came off from the shore & said they had made their escape from York on the 18th...Comparing therefore the intelligence given by these people & several others...we cannot entertain the least doubt of his Lordship's having capitulated & that we are unfortunately too late to relieve him..." with a bit more.
Just following this is a letter signed in type: Cornwallis, dated at Yorktown just two days before he would surrender, & includes: "...My situation now becomes very critical. We dare not shew a gun to their old batteries...The safety of the place is therefore so precarious that I cannot recommend that the fleet & army should run great risque in endeavouring to save us."
This is followed by another letter which mentions that: "...Lord Cornwallis had capitulated on the 18th instant...The 26th one of our boats brought off some people from the shore near Cape Charles who gave the same report of the capitulation."
Nearly two-thirds of page 2 are taken up with the complete printing of the: "Articles of Capitulation made between his Excellency General Washington...and the Right Hon. Lord Cornwallis..." including all 14 Articles with the signatures in type of Cornwallis, Tho. Symonds, and Count de Rochambeau. Extremely historic!
Eight pages, never bound nor trimmed (preferred), 9 by 12 inches, good condition. A cornerstone issue for any Revolutionary War collection and great to have this content on pages 1 and 2.

Culture of wine... The situation in...