Home > Back to Search Results > 1775 Capture of Ethan Allen....
Click image to enlarge 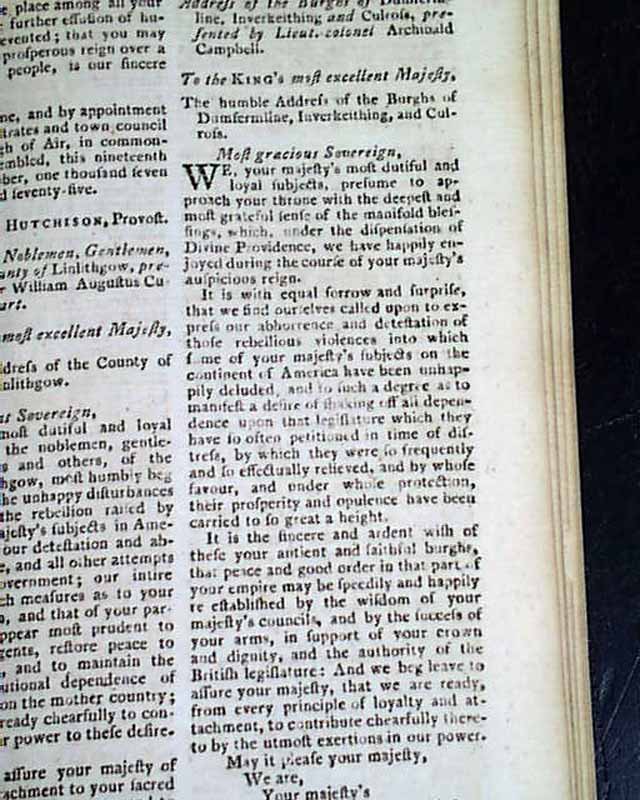 Inside has a letter to the King noting in part: "...with equal sorrow & surprise that we find ourselves called upon to express our abhorrence & detestation of those rebellious violences into which some of your majesty's subjects on the continent of America have been unhappily deluded..." with more.
Under: "America" are several reports concerning the Revolutionary War, beginning: "The rebels have sent circular letters to some of the parishes...threatening them with military execution if  they do not send to their camp 50 men each...The Canadians appear now to be sensible of the danger they run in giving credit to false promises...that the rebels from New England were about to land at Long Point on the river St. Lawrence...the people of Montreal...came up with the rebels, who were commanded by one Ethan Allen, and, after an engagement of almost an hour, drove them from the post which they had occupied...Fifteen of the rebels were  killed & wounded & between 30 and 40 taken prisoners, among whom was Allen..." with more.
Complete in 32 pages, 5 by 8 inches, great condition.