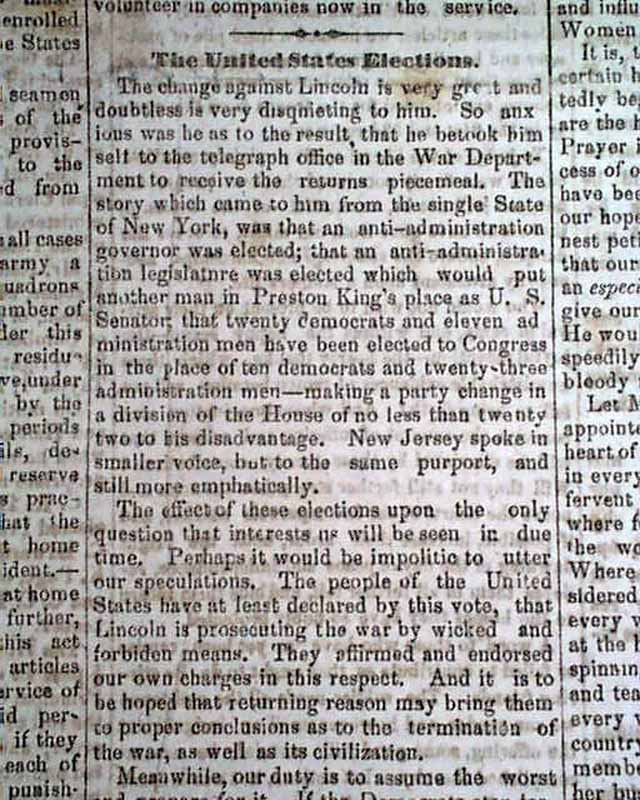 There is some nice content in the issue About half of the ftpg. is taken up with: "The Conscription Law--A Bill to be entitled 'An Act to Further provide for the public Defense.' ". Also on the ftpg. is: "The United States Elections" which includes in part: "The change against Lincoln is very great & doubtless is very disquieting to him...The people of the United States have at least declared by this vote that Lincoln is prosecuting the war by wicked & forbidden means...our duty is to assume the worst & prepare for it..." with more. Also on the ftpg: "A Cry for Peace".
Page two has: "The News" "A Goodly Sight" "The Fever at Wilmington" "Trouble Ahead Northward" "From the North".
Page 3 has: "General Lee" "Confederate Bonds" "The Women of the South" "The Exchange of Prisoners" "An Incident of Stuart's Late Raid" "The Pirate Semms" and more.
The back page has "Brother Against Brother" and a bit more but is mostly taken up with advertisements.
Complete in 4 pages, very nice condition.
An opportunity for not only a very rare Confederate title, but one with some fine content.