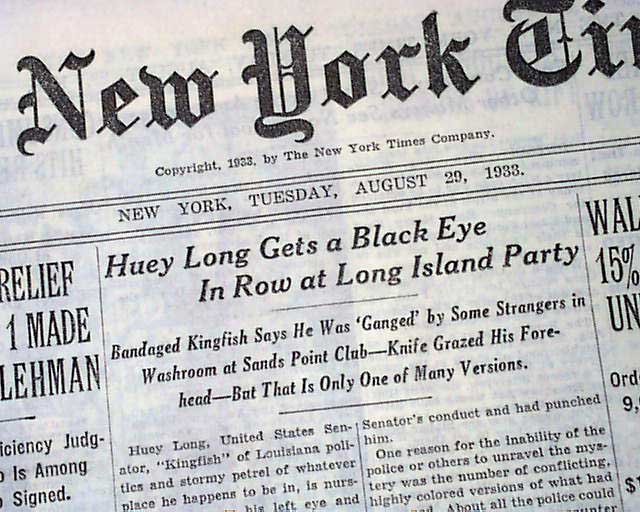 The top center of the front page has a two column heading: "Huey Long Gets a Black Eye In Row at Long Island Party" with subhead. Lengthy reporting continues on page 3 with related photo. (see)
Other news, sports and advertisements of the day. Complete in 38 pages, rag edition, minor spine wear, otherwise in great condition.

wikipedia notes: Louisiana Senator Huey Long was involved in a physical altercation at the Sands Point Bath Club in Sands Point, New York. At 3 in the morning in the club washroom, Long became involved in some kind of scuffle and received a black eye. Long later claimed in a written statement that he had been jumped by three or four complete strangers, but it was rumored that the real story was that Long was punched after he had relieved himself on the man in the next urinal. The incident made news around the world, and Collier's magazine even offered a medal and a cash prize to the assailant if he would come forward. The reward was never claimed.