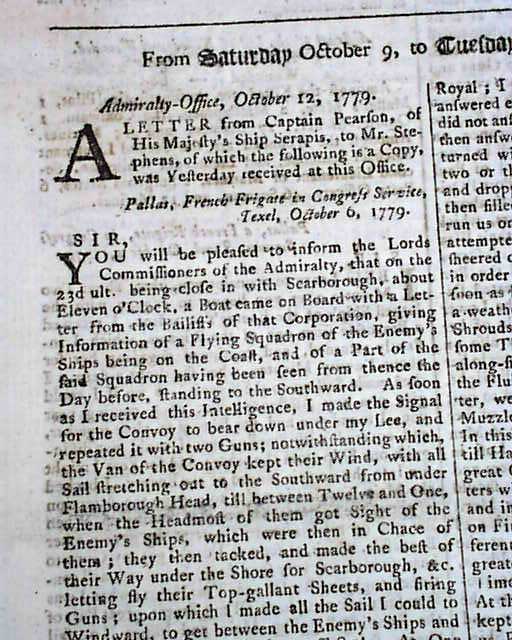 A terrific issue on the famous naval battle between the Bon Homme Richard and the Serapis, the former commanded by none other than John Paul Jones.
The entire front page is taken up with a letter prefaced with: "A letter from Captain Pearson of his Majesty's ship Serapis, to Mr. Stephens, of which the following is a copy, was yesterday received at this office." What follows is the personal account of this famous naval battle which continues on to page 2 where it is signed in type: R. Pearson.
The text contains much detail, and includes: "...The first Lieutenant and myself were immediately escorted into the ship alongside, when we found her to be an American ship of war, called the Bon Homme Richard, of 40 guns and 375 men, commanded by Captain Paul Jones..." and further on: "...I am extremely sorry for the misfortune that has happened, that of losing his Majesty's ship I had the honour to command...every exertion has been used to defend her..." with much more.
It's curious that part of the text notes: "...At ten o'clock they called for quarters from the ship along side, and said they had struck [sign of surrender]. Hearing this, I called upon the Captain to know if they had struck or if he asked for quarter; but no answer being made, after repeating my words two or three times, I called for the boarders & ordered them to board, which they did...".
History tells us that in response to the call for quarters John Paul Jones supposedly responded with the immortal words: "I have not yet begun to fight."
This is followed by an account of the killed and wounded, and then by the eye-witness account of Tho. Piercy, headed: "Pallas, A French frigate, in Congress service, Texel, Oct. 4, 1779", this being the account of the French ship Pallas capturing the British ship Countess of Scarborough which was part of the same naval battle.
Following this are other letters concerning naval encounters.
Eight pages, red tax stamp on the ftpg., 7 3/4 by 12 pages, nice condition.