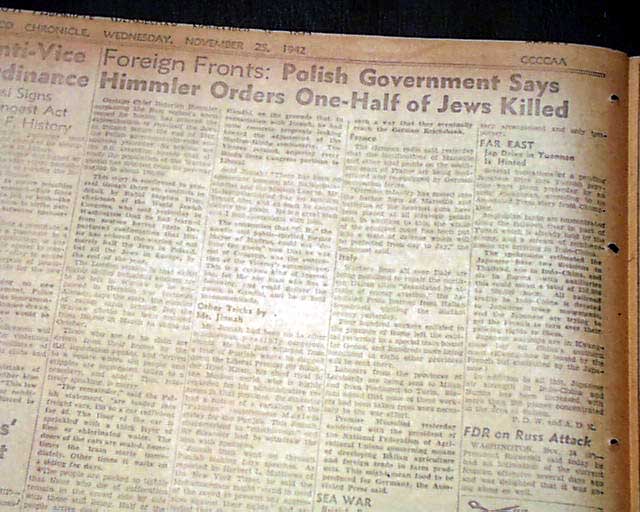 The top of page 6 has a 4 column head: "Polish Government Says Himmler Orders One-Half of Jews Killed".
This report includes: "...surpassing the Nazi regime's worst record for horror, has ordered the extermination of one-Half the Jews in Poland before the end of 1943...already the population of the Warsaw ghetto has dropped from its pre-war 500,000 to about 100,000...Those who are to be slain are driven from their homes by the S.S. liquidation squads...taken to a cemetery and shot...loaded into freight cars...people are packed to tightly that those who die of suffocation remain in the crowd side by side with those still living. Half of the people arrive dead at the destination...Once there they are mass-murdered..." with some gruesome details.
This was one of the earlier reports which unveiled the horrors of the Jewish extermination plan, to become much more visible the closing weeks of the war in Europe. Interesting that such a notable revelation was relegated to page 4.
Complete with 26 pages, light toning at the margins, nice condition.