Home > Back to Search Results > Capture of the first train robbers in America...
Click image to enlarge 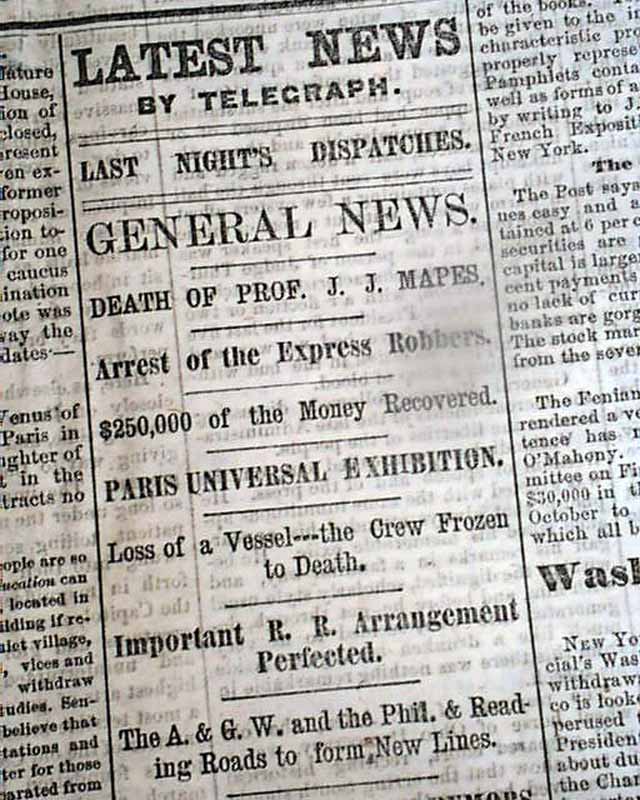 Capture of the first train robbers in America...

The front page has a stack of column heads which include: "Arrest of the Express Robbers" "$250,000 of the Money Recovered". The actually report takes a paragraph and has a subhead: "Captured". The text is a bit blurred from the ink but is readable (see).
What is notable is that most internet sources note that the Reno brothers train robbery of October, 1866 was the very first train robbery in the United States, however "encyclopedia.com" gives the following details about this early robbery:
"Train Robberies were more frequent in the United States than anywhere else in the world in the latter half of the nineteenth century. Vast stretches of sparsely inhabited country permitted robbers to escape undetected; carelessness and lack of adequate security on trains also made robberies easier. The robbery of $700,000 from an Adams Express car on the New York, New Haven, and Hartford Railroad, the first train robbery on record, occurred in 1866. That same year, the four Reno brothers stole $13,000 in their first train holdup...".
Four pages, 32 by 23 inches, minor spine wear, generally nice. The folder size noted is for the issue folded in half.