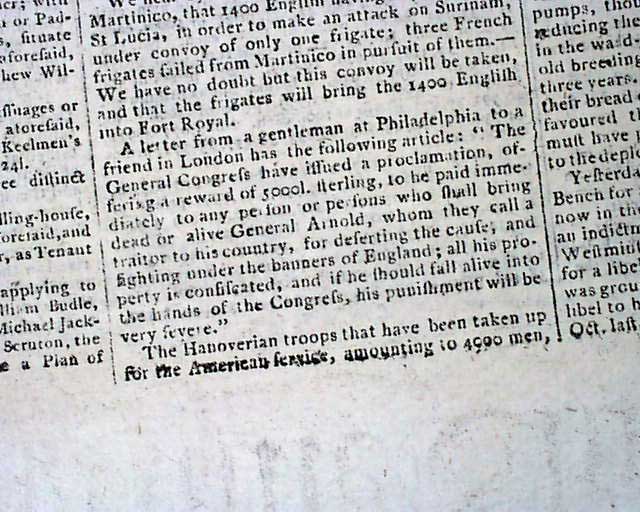 This is one of the more noteworthy issues of the Chronicle for the entire Revolutionary War, as it is the first issue in this title to announce the surrender of Lord Cornwallis at Yorktown, essentially ending the Revolutionary War.
Page 2 has a letter from Earl Cornwallis to Sir Henry Clinton, dated at Yorktown Oct. 15, 1781, noting: "Last evening the enemy carried my two advanced redoubts on the left by storm...they are at present busy in perfecting. My situation now becomes very critical. We dare not shew a gun to their old batteries and I expect their new ones will be open to-morrow morning...we shall soon be exposed to an assault in ruined works, in a bad position, and with weakened numbers. The safety of the place is therefore so precarious that I cannot recommend that the fleet & army should run great risque in endeavouring to save us." signed in type: Cornwallis.
Indeed, Cornwallis would surrender to Washington 4 days later.
Another report includes an early announcement of the surrender: "...who had made their escape together from York, that Lord Cornwallis had capitulated on the 18th inst., the day before the fleet sailed from Sandy Hook. The 26th one of our boats...who gave the same report of the capitulation..." and other confirming reports.
Then: "It is supposed there are between 6 and 7000 troops...taken by the Americans & French from Lord Cornwallis. Amongst the articles of capitulation were the following: The garrison of York and Gloucester including the officers & crews...shall surrender themselves prisoners of war to the combined forces of America & France..." and more. "The rejoicing at Versailles, & throughout all Paris, on this occasion, were scarce ever equaled before.
The ftpg. has an item: "...The General Congress have issued a proclamation offering a reward of 5,000 pd. sterling to be paid immediately to any person or persons who shall bring dead or alive General Arnold, whom they call a traitor to his country, for deserting the cause; and fighting under the banners of England; all his property is confiscated, and if he should fall alive into the hands of the Congress, his punishment will be very severe."
Other items concerning the war events including mention of Benedict Arnold's attack on New London, and mention that: "...The most sanguine American refugees have now given up the idea of conquering America. It is thought that the troops will be withdrawn from every part of the continent...".
Four pages, never bound no trimmed with wide margins, full red tax stamp on the ftpg., a bit of foxing at the margins, very nice condition.