Home > Back to Search Results > Much on the troubling relations between England & the colonies...
Click image to enlarge 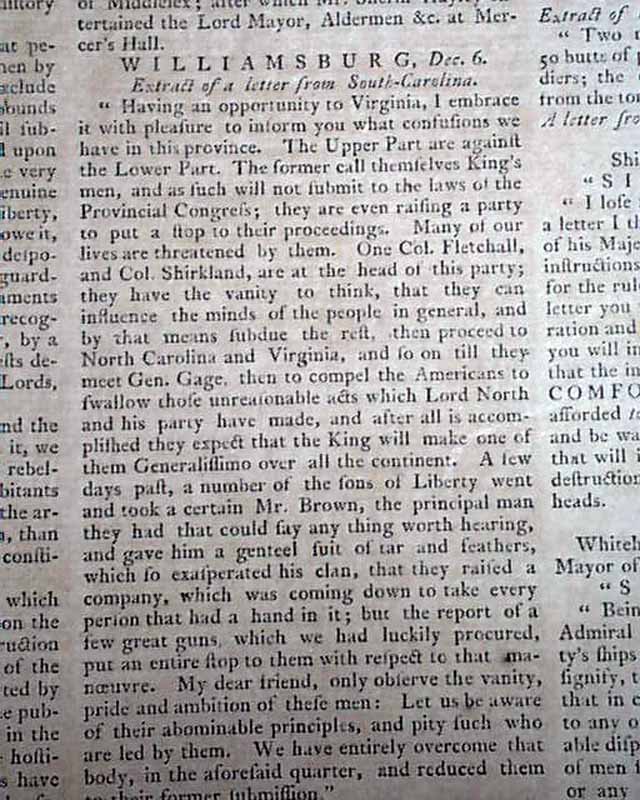 Almost half of the front page is taken up with an address of the people Massachusetts concerning the state of our affairs with England and our relations with them. A few bits including: "We behold, with all the horror & grief national to a free people, the fatal stab given...my a majority of the last venal Parliament, whereby...the right of election was in the most impious manner wrested from the electors...We are called upon to redouble our attention & zeal for the defence & preservation of all our constitutional rights from seeing the iron hand of oppression extended to our fellow subjects on the other side of the Atlantic...We lament, as a commercial people, the inevitable injuries that must be sustained by the loss of a most valuable branch of our commerce..." and more.
What takes close to half of pg. 2 is an address "To the King's most Excellent Majesty" with more on the troubling relations between England & the colonies (see for portions). The balance of page 2 is taken up with further reports concerning the Revolutionary War, too much to detail here.
Four pages, Royal coat-of-arms in the masthead, lightly toned throughout, some numeric notations in margins next to ads (this was the editor's copy), light damp stain near the bottom.