Home > Back to Search Results > "Extraordinary" issue on the Battle of Monmouth...
Click image to enlarge 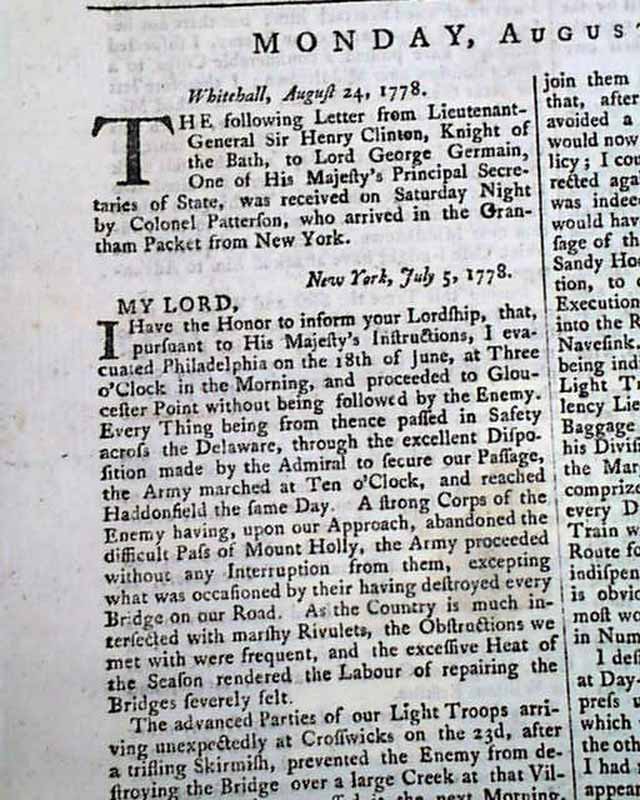 "Extraordinary" issue on the Battle of Monmouth...

Such "extraordinary" issues were created when notable news was received outside the normal printing schedule and the publisher wanted to rush the news to the people as quickly as possible.
The purpose of this issue is the historic Battle of Monmouth. All of pages 1 and 2 are a lengthy letter signed: H. Clinton with his report on the battle, a few bits including: "...I evacuated Philadelphia on the 18th of June...& proceeded to Gloucester Point...I had received intelligence that Generals Washington and Lee had passed the Delaware with their army..." with much, much more detail on the battle.
Following this is the: "Return of the Killed, Wounded, Missing of the Troops under the Command of General Sir Henry Clinton...on the heights of Freehold, County of Monmouth, New Jersey,  the 28th of June, 1778."
Four pages with the back page blank, partial red tax stamp on the ftpg., 8 by 12 inches, very nice condition.