Home > Back to Search Results > The editor is arrested for conspiracy...
Click image to enlarge 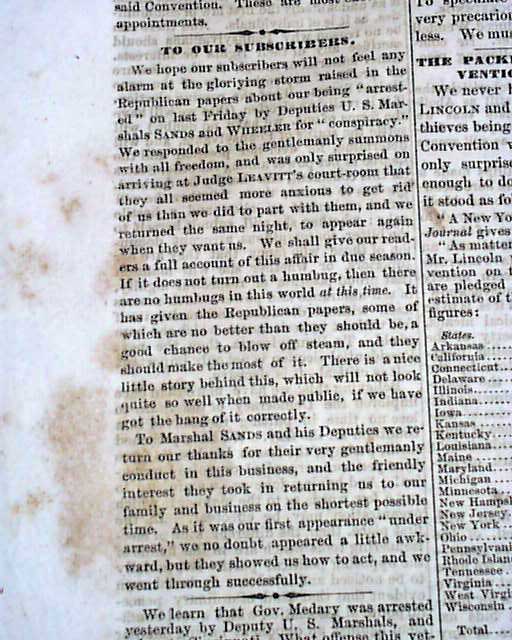 A significant issue as page 4 has a notice: "To Our Subscribers" which comments on the arrest of Samuel Medary, this newspaper's editor & publisher, noting in part: "...about our being arrested on last Friday by Deputies U.S. Marshals Sands and Wheeler for conspiracy...". Further on is the news report: "We learn that Gov. Medary was arrested yesterday by Deputy U.S. Marshals and taken to Cincinnati. What offense this veteran statesman and patriot is accused of we are at a loss even to surmise..." with more on this.
This newspaper was critical of the U.S. limiting slavery and of the war itself. Described as "The Hottest Rebel Sheet to be found in the North or the South" this newspaper opposed the war and attracted the hatred of the Republicans and the Lincoln administration. It insisted that slavery could not be prohibited by law. So obnoxious was this paper to Unionists that it was denied circulation in some cities. In 1863 the press was raided by a hateful mob.
Page 4 also has the: "...bogus proclamation of Mr. Lincoln..." signed in type: Abraham Lincoln.
Eight pages, never bound nor trimmed, some foxing, nice condition.