Home > Back to Search Results > Early and rare from Florida... Start of the Mexican War...
Click image to enlarge 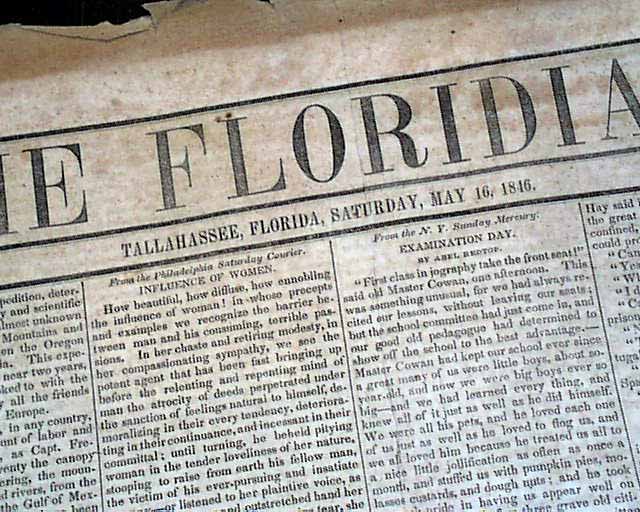 Early and rare from Florida... Start of the Mexican War...

Nineteenth century newspapers from Florida are uncommon, particularly those from before the Civil War. Here is such an issue from the capital city of Florida, seven years before the Civil War.
The key content in this is breaking news headlines on page 3 from the start of the Mexican War: "From The Army" "Glorious News!" "Gen. Taylor Attacked in his Entrenchments!!" "Repulse Of The Mexicans With The Loss Of Seven Hundred Men!" "Junction Of Gen. Taylor's Army With His Stores At Point Isabel". The report begins: "We stop the press to give the following information from the Army of the frontier..."  & more (see).
There is a related report on pg. 3: "To Arms! To Arms!"  "Later From The Army" & on pg. 2 several dispatches under "Late and Disastrous News From Gen. Taylor's Army" "The War With Mexico Began" (see for portions). The back page has a notice offering a reward for a runaway "...negro man TOM...", which includes an engraving of a runaway.
Four pages, minor foxing, nice condition.