Home > Back to Search Results > On Davy Crockett, referencing his death at the Alamo...
Click image to enlarge 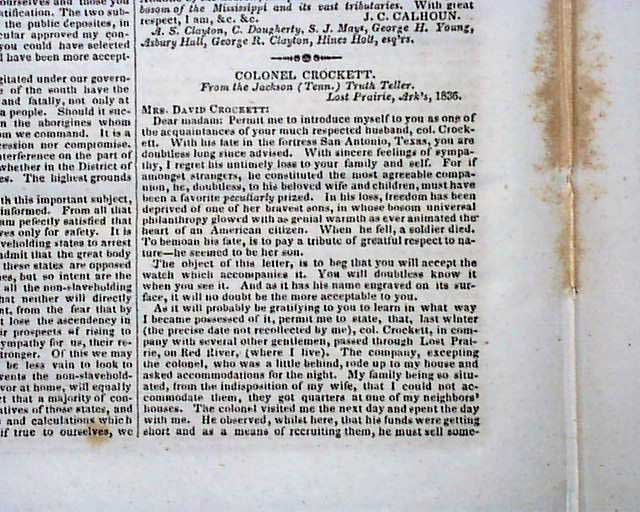 On Davy Crockett, referencing his death at the Alamo...


NILES' WEEKLY REGISTER, Baltimore, Aug. 27, 1836  Perhaps the best article in this issue is titled: "Colonel Crockett" which is a letter to Davy Crockett's widow written by a person who knew him, portions including: "...With his fate in the fortress San Antonio, Texas, you are doubtless long since advised...I regret his untimely loss to your family & self...When he fell, a soldier died...In his loss freedom has been deprived of one of her bravest sons...The object of this letter is to beg that you will accept the watch which accompanies it..." followed by the particulars as to how he came into possession of it. The writer concludes with more glowing comments about Davy Crockett (see photos for the full text).
Among the other reports in this issue are: "The African Colony" in Monrovia, Liberia" "Indian War" "Mexico and Texas" "The Kentucky Volunteers Disbanded" "The Whale Fishery" "Letter from the Hon John C. Calhoun" signed by him in type: "Mr. Madison and the Constitution" "Mr. Van Buren and the Anti-Masons" and more.
Sixteen pages, 6 by 9 1/2 inches, scattered foxing, nice condition.