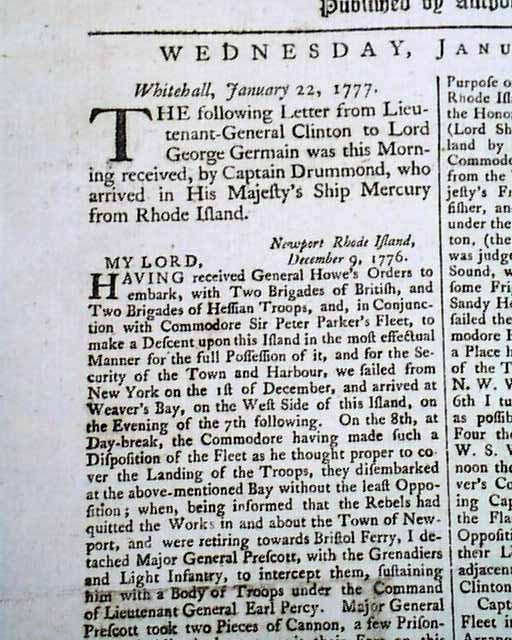 This is a broadside "Extraordinary", being single sheet and printed on one side only.
"Extra" issues were printed when notable news was received outside the normal printing schedule, issue to get the information into the hands of the public as quickly as possible.
This issue is entirely taken up with reports on the taking of Newport, Rhode Island, including a letter from Newport, dated Dec. 9, 1776 signed in type by: H. Clinton, which includes: "Having received General Howe's orders to embark...in conjunction with Commodore Sir Peter Parker's fleet, to make a descent upon this island in the most effectual manner for the full possession of it & for the security of the town & harbour, we sailed from New York..." with more.
This is followed by a letter signed by: P. Parker, from Chatham Rhode Island, in which he provides some details on the occupation of Newport, followed by: "A List of the Rebel Ships & Privateers at Providence...".
Single sheet, nice condition.

Fourteen British issues from the end ...