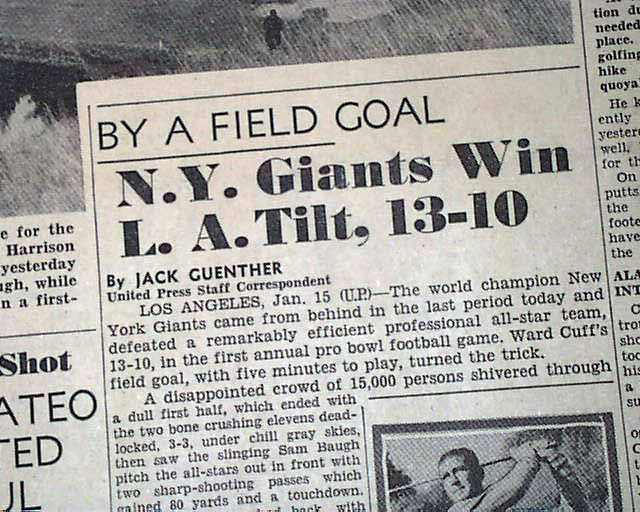 
SPORTING GREEN section only of the San Francisco Chronicle, January 16, 1939

The front page of this section has a two column heading: "N.Y. Giants Win L. A. Titlt, 13-10" with lineups. (see) First report coverage on the very 1st National Football League All-Star Game (Pro Bowl).
Other sporting news of the day. Complete sport's section only with 4 pages, light toning at the margins, some small binding holes along the spine, nice condition.

wikipedia notes: A post season all-star game between the new league champion and a team of professional all-stars was added to the NFL schedule at the end of the 1938 season. On January 15, 1939, at Wrigley Field in Los Angeles, California, the New York Giants won the first "Pro All-Star Game," 13-10, defeating a team of players from NFL teams and two future Pacific Coast Professional Football League clubs, the Los Angeles Bulldogs and the Hollywood Stars.

This format continued for the next four seasons, except that the all-star team now consisted solely of NFL players. In January 1942, in the aftermath of Pearl Harbor, the game was moved from Los Angeles to the Polo Grounds in New York City. The last "Pro All-Star Game" was held in December 1942. With the wartime NFL playing a reduced schedule starting in 1943, the series was abandoned.

The NFL revived the game (now dubbed the "Pro Bowl") in January 1951, after the 1950 season. The game was now a contest between conference all-star teams: American vs. National (1951-53) and Eastern vs. Western (1954-70). The rival AFL, meanwhile, staged its own All-Star Game from 1962-70, using the same East vs. West format. The AFL departed from this format once, in the January 1966 game, when the league champion Buffalo Bills played all-stars from the rest of the league.

After the AFL-NFL Merger of 1970, the name of the NFL's all-star game was changed to the "AFC-NFC Pro Bowl". Since the merger, the head coaches of the teams that lost in the AFC and NFC championship games have been selected as the coaches for the respective Pro Bowl squads — a compromise that arose from the decision to discontinue the Playoff Bowl, which had it been retained, would have matched up the two teams that lost the conference title games.

Currently, players are voted into the Pro Bowl by the coaches, the players themselves, and the fans. Each group's ballots count for one third of the votes. The fans vote online at the NFL's official site. There are also replacements that go to the game should any selected player be unable to play due to injuries. Prior to 1995, only the coaches and the players made Pro Bowl selections.