Home > Back to Search Results > Capture of Danbury, Connecticutâ¦
Click image to enlarge 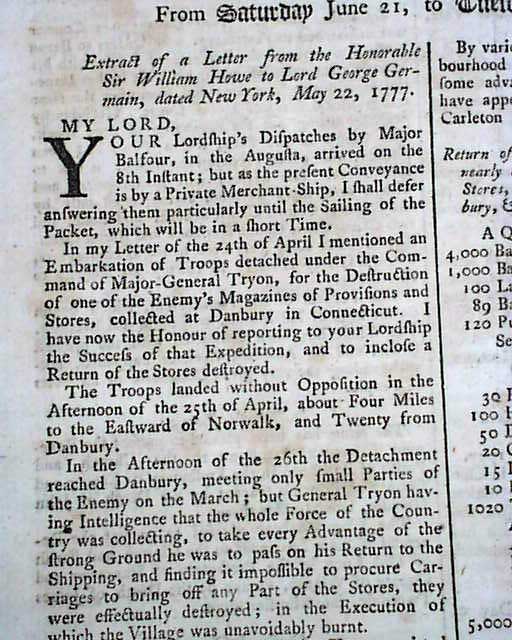 
THE LONDON GAZETTE, June 24, 1777  The front page is entirely taken up with: "Extract of a Letter from Sir Wm. Howe to Lord George Germaine, dated New York, May 22, 1777" which includes some nice details on the taking of Danbury & Ridgefield, Connecticut, with mention of Benedict Arnold. Included is the: "Return of stores, ordnance, provisions as nearly as could be ascertained, found at the Rebels stores & destroyed by the King's troops at Danbury in Connecticut, April 27, 1777" which carries over to page two where is included: "Return of the rebels killed & wounded on the 27th & 28th of April, 1777 in Conn. By the detachment under the command of Maj. Gen. Tryon".
A very fine account of this major battle, and great to have it consume the front page. Details on the "Killed"  "Wounded" and "Taken" carry over to page 2. Terrific to have this account in the newspaper which was the "mouthpiece" of the royal government. This accounts precedes the Chronicle report by 2 days.
Four pages, 8 by 12 inches, red tax stamp on the ftpg., wide margins, very nice condition.