Home > Back to Search Results > Nice issue on the fall of Charleston to the British...
Click image to enlarge 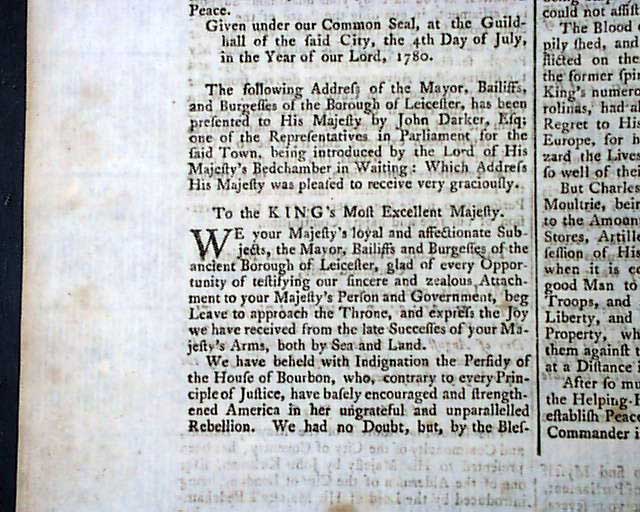 Nice issue on the fall of Charleston to the British...

Page 2 has an address: "To the King's Most Excellent Majesty" with praise for: "...the late successes of your Majesty's arms..." in America. Also expressing: "...indignation..." towards France which has: "...basely encouraged & strengthened America in her ungrateful and unparalleled Rebellion..." with more.
Then, with an introductory prefaced signed by: H. Clinton, is: "Hand Bill Issued After the Surrender of Charles Town [Charleston]". Then two Proclamations by Henry Clinton dated at South Carolina, concerning the British occupation of the city, etc.
Then there is: "The Humble Address of Divers Inhabitants of Charles Town" taking nearly half a page, then the: "Articles of Capitulation...on the Surrender of that Fort [Moultrie, in Charleston harbor]...".
Great to have this report in the newspaper which was the "mouthpiece" of the British government. The 'London Chronicle" report did not print until 3 days later.
Eight pages, 7 3/4 by 12 inches, red tax stamp on the ftpg., good condition.