Home > Back to Search Results > 1939 Howard Rushmore & "Gone With the Wind" controversy......
Click image to enlarge 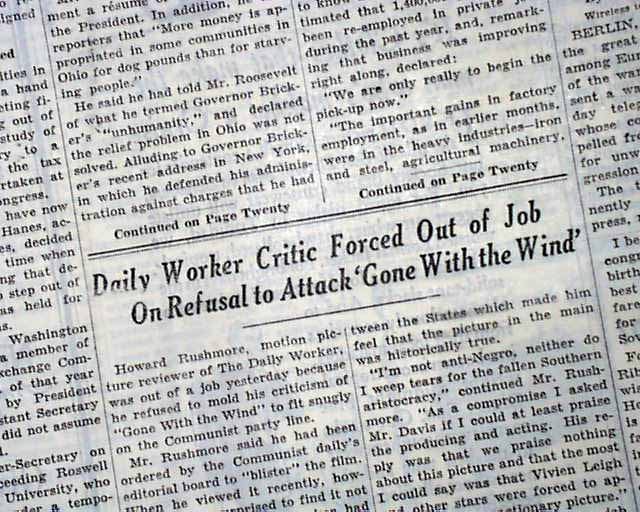 The front page has a two column heading: "Daily Worker Critic Forced Out of Job On Refusal to Attack 'Gone With the Wind'" (see)

wikipedia notes: By 1939 he was the paper's official film critic. But in December he was fired for giving an ambivalent review of Gone with the Wind (1939). Rushmore was impressed by the film's technical aspects. But despite describing the film as a "magnificent bore" and holding to the standard communist party line that the film was "racist," this was regarded as insufficiently negative by the editorial board. The chief editor of the Worker, Ben Davis, who personally fired Rushmore, was particularly incensed at Rushmore's refusal to rewrite the review. But the sacking backfired as it made the front page of all the major New York newspapers, such as the New York Journal-American, New York Post and The New York Times, as well as mainstream papers across the country, which were supportive of Rushmore. The resulting publicity made the 26-year-old an instant celebrity in anti-communist circles. One of the most prominent columnists of the era, Westbrook Pegler, gave Rushmore rousing support in his December 29, 1939 column.

Other news, sports and advertisements of the day. Complete with all 40 pages, rag edition in nice condition.