Home > Back to Search Results > Editor has a gloomly outlook on the war...
Click image to enlarge 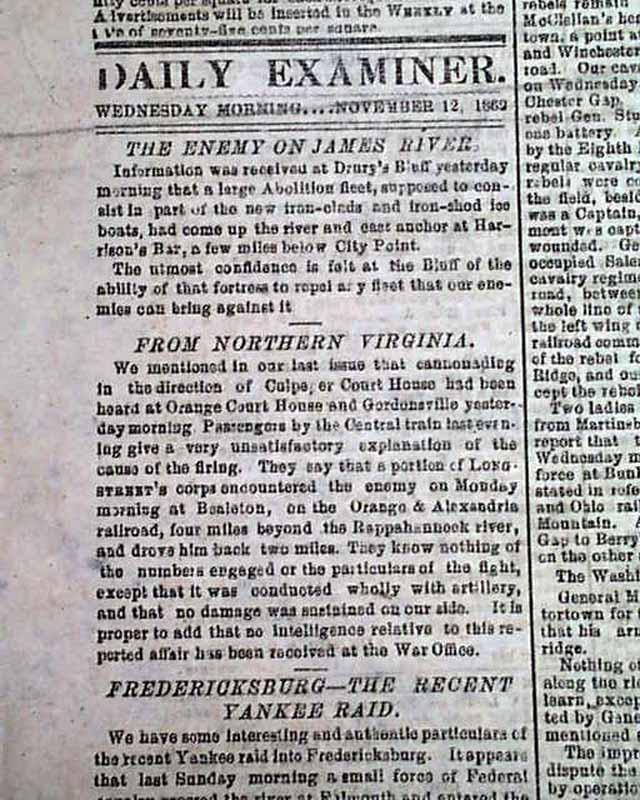 Editor has a gloomly outlook on the war...

The front page has much on the Civil War with items headed: "The Enemy Of James River", "From Northern Virginia", "Fredericksburg--The Recent Yankee Raid", "The Navigation of The Mississippi", "Latest News From The North", and many subheads, including: "The Advance of the Yankees in North Carolina--Speculations as to the Object of Their Attack", "From the Armies in the Southwest", and more. There are also many Acts of the Confederate Congress.
The bkpg. has a lengthy editorial, always interesting reading in this title, beginning: "The interest of the moment is absorbed in the movements of McClellan and Lee. The Northern press has been more than usually garrulous on the successful advance of McClellan...They declare he has possession of the gaps in the mountains...On our own side, there is so little information of an authentic character that we are compelled to judge the position of General Lee by the enemy's own statements...".
Another portion of the editorial begins: "...But it must be confessed that a view of the field of war, at this moment, nowhere affords much encouragement. Hopes of conquering a peace on the Potomac must, for the time, be given up. The brilliant advance towards the Ohio has ended in a universal retreat. Maryland & Kentucky have been gloomily abandoned..." & more. The bkpg. also has: "The Movement to Believe the Destitute Soldiers" "Confederate States Prison Items" "City Intelligence" "Telegraphic News" and a few other items.
Complete as a single sheet newspaper with a full banner masthead, very nice condition.