Home > Back to Search Results > Is the pursuit of independence worth the effort?
Click image to enlarge 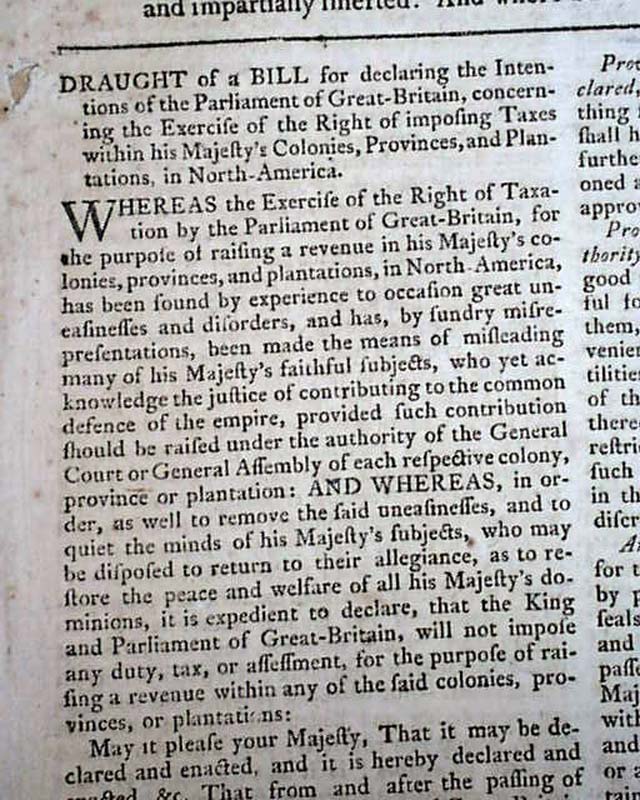 Is the pursuit of independence worth the effort?


THE PENNSYLVANIA LEDGER OR THE PHILADELPHIA MARKET-DAY ADVERTISER, April 22, 1778  This was a strongly Tory (supportive of the British cause) newspaper which began in 1775 and closed shop in May of 1778 when the British evacuated Philadelphia.
Over two-thirds of the front page is taken up with the text of two Bills being considered in Parliament relating to America. The first is a: "DRAUGHT of a BILL for declaring the Intentions of the Parliament...concerning the Exercise of the Right of Imposing Taxes within His Majesty's Colonies..." and the other is a: "DRAUGHT of a BILL to enable his Majesty to appoint Commissioners with sufficient powers to treat, consult, and agree upon the means of quieting the disorders now subsisting in certain of the Colonies, Plantations and Provinces of North America." This latter document was an effort to come to agreeable terms for a peace settlement.
All of page 2 is taken up with a fascinating & very lengthy letter headed: "A Friendly Address to Every American, especially the Inhabitants of Pennsylvania." signed in type by: "A Friend of Mankind". The writer reviews the current situation in the colonies with respect to England and touches much upon the issue of independence and includes quotes from George Washington. A few bits include: "...I may venture to whisper in your ear that his (independence) excepted, I firmly believe that America might have carried every other point; and certainly there was a time when this would have been deemed a conquest beyond the warmest wishes of the warmest American...Here General Washington acknowledges that Great Britain was disposed to grant every thing America had a right to expect, & even more than he himself would ask...Let us now inquire into the present effects of your attempt in establishing independency, supposing you should be able to effect it, in order to know whether it will be worth the expence of blood & treasure necessary to compleat it..." and so much more.
Much war-related content carries over to page 3 as well.
Included with this issue is a single sheet: "Supplement to the Pennsylvania Ledger" of the same date, entirely taken up with ads & notices.
Four pages, an ink stain in the masthead, very light damp stain to a lower corner, numeric notations in margins next to ads (this was the editor's copy), very nice condition. Not surprisingly, being a Tory newspaper, the masthead includes a nice engraving of the Royal coat-of-arms.