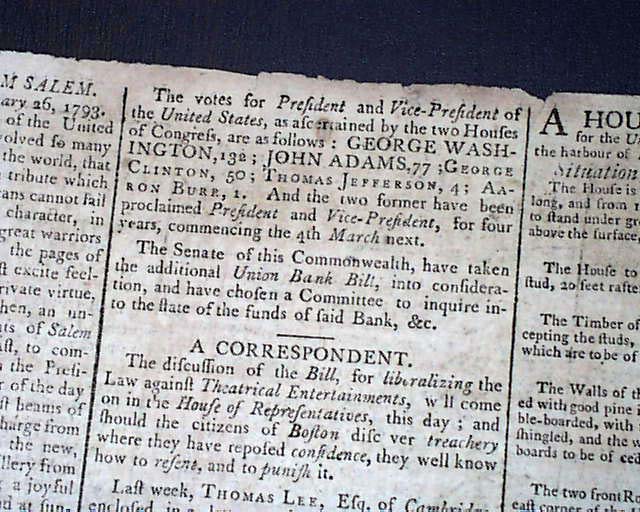 Certainly the most significant item in this issue is the report at the top of page 3 announcing the opening of the votes for President & Vice President.
History tells us that it was on February 13, 1793, when Congress officially tabulated the votes from the election of 1792.
A page 3 column begins: "The votes for President and Vice President of the United States, as ascertained by the two Houses of Congress, are as follows: GEORGE WASHINGTON, 132; JOHN ADAMS, 77; George Clinton, 50; Thomas Jefferson, 4; Aaron Burr, 1. And the two former have been proclaimed President and Vice-President for four years, commencing the 4th of March next."
An exceedingly historic report. Rarely do we have the pleasure of offering a newspaper with the official election report of George Washington's 2nd and last term.
Also, pg. 3 has a "War Department" notice signed in type by H. Knox, Secretary of War.
Four pages, various irregularities at the margins with several archival mends at the edges. Other smaller tears at the margins and various light foxing.