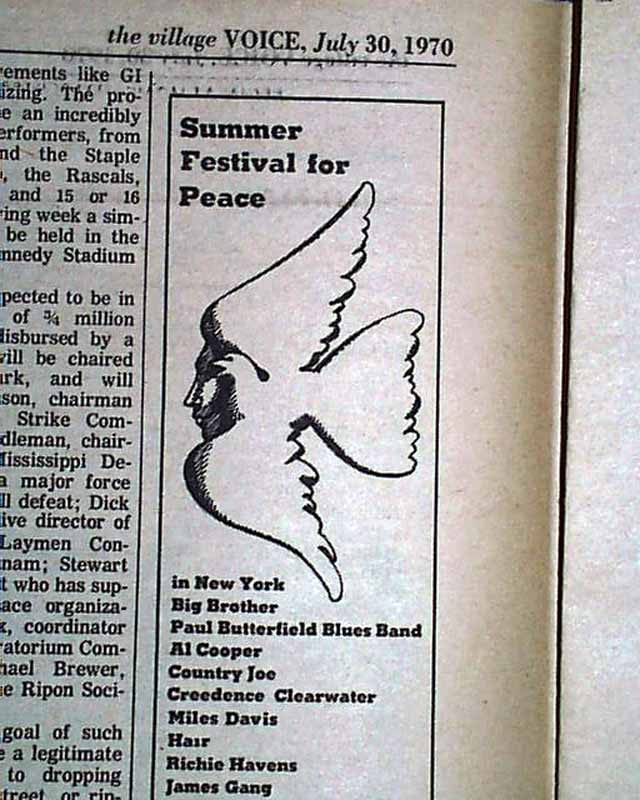 
THE VILLAGE VOICE, Greenwich Village, New York, July 30, 1970  A significant newspaper on the historic "Festival For Peace" concert at Shea Stadium as this was the only issue in which the iconic advertisement appeared. The Janis Joplin website identifies this festival/concert as her last public performance before her untimely death.
It is worth noting that "The Village Voice" was an American news and culture paper, known for being the country's first alternative newsweekly. So it is notable that this newspaper would have advertisements and reports on various music festivals. This issue has a 2 by 8 inch ad for the "Festival For Peace" (see pg. 28), an all day concert event produced at Shea Stadium on August 6. The somewhat related article, "Rip-offs and revival", begins on page 25, and discusses the concept of rock festivals, starting with Woodstock and ending with the "Festival for Peace", and concludes on the same page as the ad for the "Festival for Peace".
In regards to the festival itself, Wikipedia notes that very little media has survived and no film of this concert has surfaced publicly despite the fact that it featured such historic performers as Janis Joplin, Paul Simon, Creedence Clearwater Revival, Steppenwolf, The James Gang, Miles Davis, Johnny Winter, Herbie Hancock, Dionne Warwick, John Sebastian, The Rascals, the cast of "Hair, and a dozen other important acts of the period. See the ad for the list
This was the first major concert at Shea Stadium after the last performance of The Beatles in 1966. This ad did not appear in the July 23 or August 6 issues.
Also present are ads for Janis Joplin and the Butterfield Blues Band, Livingston Taylor's first album, The Grateful Dead, and "PERFORMANCE", a movie starring Mick Jagger.
Complete in 64 pages, never bound nor trimmed, tabloid-size, occasional margin-edge tears, a soft crease across the center, very nice condition.