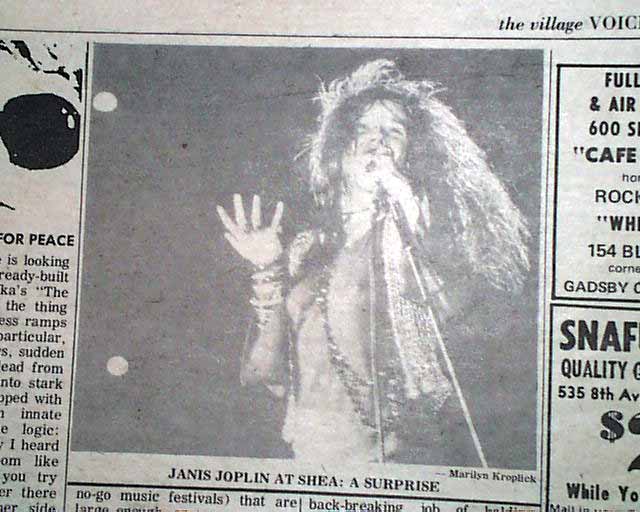 
THE VILLAGE VOICE, Greenwich Village, New York, August 13, 1970  A significant newspaper on the historic "Festival For Peace" concert at Shea Stadium. The front page has a photo of the festival, and an article/review which begins on page 40, under "RIFFS" has "DANGER: MUSIC FOR PEACE", and includes a photo of Janis Joplin. The article continues on the opposing page and finishes on page 57. The Janis Joplin website identifies this concert as her last public performance before her untimely death - making this one of the last, if not the last, photo of her performing.
Another photo show Johnny Winter. Also included are ads for several additional movies, festivals and concerts which include a full-page ad for "IRON BUTTERFLY", and a 2/3 page ad for the movie, "PERFORMANCE", starring Mick Jagger.
It is worth noting that "The Village Voice" was an American news and culture paper, known for being the country's first alternative newsweekly. So it is notable that this newspaper would have an extensive report on the "Festival For Peace", and perhaps one of just a few select newspapers which did.
The Festival for Peace was an all day concert event produced at Shea Stadium on August 6. It was the second event of a series planned to raise funds for anti-war political candidates in the early 1970s.
Wikipedia notes that very little media has survived and no film of this concert has surfaced publicly despite the fact that it featured such historic performers as Janis Joplin, Paul Simon, Creedence Clearwater Revival, Steppenwolf, The James Gang, Miles Davis, Johnny Winter, Herbie Hancock, Dionne Warwick, John Sebastian, The Rascals, the cast of "Hair, and a dozen other important acts of the period.
This was the first major concert at Shea Stadium after the last performance of The Beatles in 1966. A wide selection of still photos shot by photographer Ken Davidoff are the only readily available visual documentation of the concert itself.  Given this, the report and photos in this issue are significant.
Complete in 72 pages, never bound nor trimmed, tabloid-size, a soft crease across the center, very nice condition.