Home > Back to Search Results > General Howe proclamations in a Tory newspaper.....
Click image to enlarge 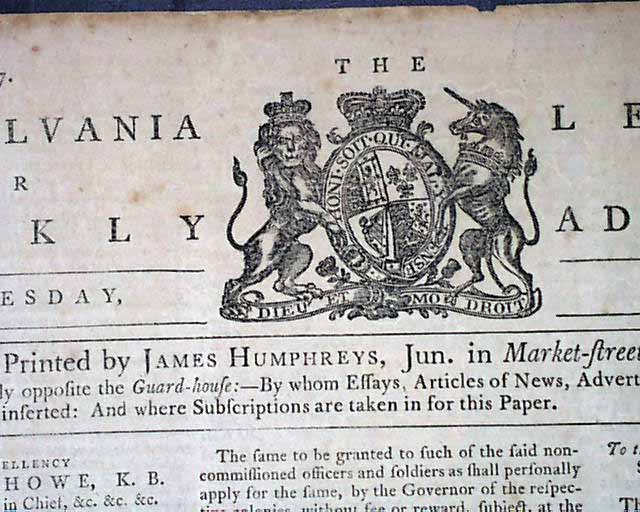 
THE PENNSYLVANIA LEDGER OR THE WEEKLY ADVERTISER, Philadelphia, Nov. 19, 1777

This was a strongly Tory newspaper published in Philadelphia when the British were in occupation. It began in 1775 and ended when the British evacuated the city in May of 1778. Not surprisingly, the masthead features an engraving of the Royal coat-of-arms.
The first two columns on the front page feature three "Proclamations", each signed in type by: W. Howe, One first Proclamation concerns recruiting soldiers to the British army, and the second includes: "...This is to proclaim that all those who do voluntarily surrender themselves to any of His Majesty's Troops before the first day of December next shall receive a free pardon, and that no Mercy will be shewn to such as may be taken in arms from the date hereof." Another also relates to offering pardon to deserters, and the third concerns various offers of land to those who enlist in the King's service.
Page 2 has several reports concerning the Revolutionary War including a letter about Brig. General Parsons, another item has a letter from New York which notes in part: "As the Rebels have in their newspapers favoured the public with Gen. Burgoyne's orders..." with more. Also a letter dated at Mendom, Sept. 5, 1777 (see). Page 3 has half a column with military items including: "...inhabitants of Augusta country have taken up arms in favour of government & are grown formidable in their numbers..." and: "The militia of Virginia in general refused to be draughted which occasioned the above mentioned excessive high bounty being offered for enlistments...A test oath, abjuring the king, has been offered...One half at least of the inferior class of people & many persons of property...have refused to take it...many persons were imprisoned & others sent off to the frontiers of that province..." with more. Also a report which mentions in part: "...the crisis approaching to attack it by storm, the Rebels, sufficiently panic-struck by the operations of the day...abandoned it with the greatest precipitation & fright, setting fire to their barracks but leaving their cannon..." with more.
Four pages, numeric notations next to ads (this was the editor's copy), light damp stain to a lower corner, very nice condition.

Washington, Adams, & Jefferson on the...