Home > Back to Search Results > First use of the popular term "Ivy League"...
Click image to enlarge 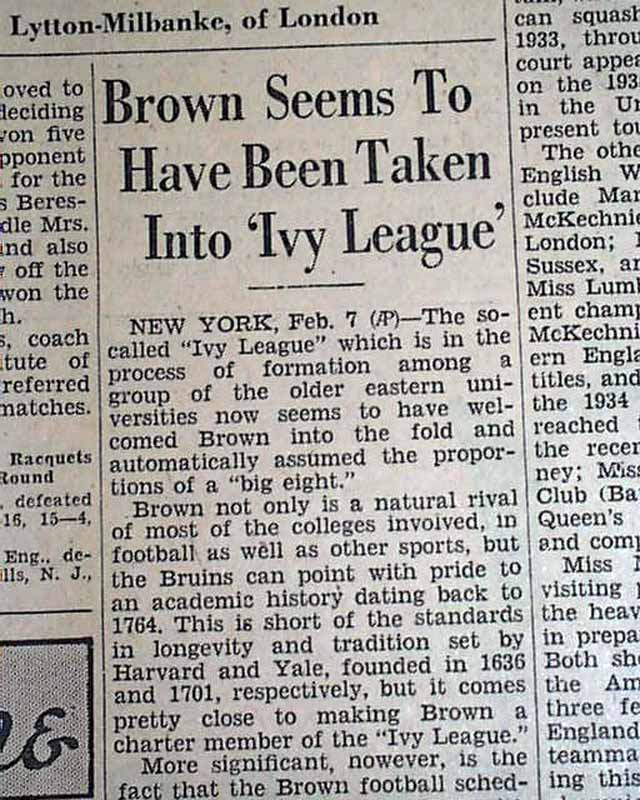 Page 6 contains a rather mundane, one column article headed: "Brown Seems to Have Been Taken Into 'Ivy League' " but it is significant for being the very first use of the term "Ivy League" to appear anywhere.
Wikipedia notes in part: "The first known instance of the term Ivy League being used appeared in The Christian Science Monitor on February 7, 1935. Several sportswriters and other journalists used the term shortly later to refer to the older colleges, those along the northeastern seaboard of the United States, chiefly the nine institutions with origins dating from the colonial era, together with the United States Military Academy (West Point), the United States Naval Academy, and a few others. These schools were known for their long-standing traditions in intercollegiate athletics, often being the first schools to participate in such activities. However, at this time, none of these institutions made efforts to form an athletic league...".
A very interesting report and notable for this first use. Complete as a twelve page newspaper, very nice, clean condition.